My shoeless kid is not the one that needs your voice

There is so much to be mad about in the world.  The worsening situation in Syria, gang rapes in India, human rights violations in Australia, mass shootings in America, attempted assassinations of 14 year old students in Afghanistan and for those that only read the entertainment pages of a newspaper - the duet by Olivia Newton-John and John Travolta.

If you are going to have an opinion, express a viewpoint, GIVE A SHIT, do it about something that really truly matters.  Where your voice can be part of a cacophony that brings change.  Where speaking up and pointing out wrongs makes the world a better place for everybody.

Whether or not my two year old daughter is wearing shoes in a shopping centre is not one of these issues.  And while I appreciate that the lady in the mall that pulled me up on this travesty yesterday was motivated by genuine horror at my lax parenting and the possibility of germs latching onto my daughter's feet, it really wasn't worth the rant.  I'd call her energy completely misdirected.  If she really wants to put that much effort into caring - I wish she'd chosen something that really mattered.  Not the fact that I forgot to put her shoes in the car and so she was going shoeless in an indoor mall. 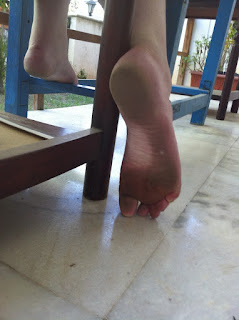 All that rage and righteousness people - use it.  But focus for fuck's sake. Focus.