The wonderful world of Disney (my first sponsored post!)

Growing up, Sundays tended to follow a fairly familiar pattern. First off - church. Normally in your 'Sunday' best which was actually 'all the time' best because lets face it - when you're that young you don't have much opportunity to dress up. Then because the shops didn't open on Sunday in those days (I KNOW WHAT WAS THAT ABOUT?) you used to go with your Dad to the rubbish tip (which you could do for FREE and you were allowed to sit on the trailer when your dad reversed it and this was considered fabulous child suitable entertainment) or maybe to a family/friends bbq lunch where you'd climb trees and steal extra fizzy drinks when the grownups weren't looking. Long afternoons playing in the backyard followed before your parents made you come in and have a bath and then - provided you hadn't been caught stealing extra fizzy drinks or standing on the trailer instead of sitting - you'd be able to turn on the TV for 6.30 pm to watch The Wonderful World of Disney.

And it would silence all of us. Even if it was a repeat. The opening sequence would roll, the music would play and a simple story would transform the evening. Even when we were too cool to technically be watching so we had to hang over the back of the couch on the pretext of annoying the younger siblings.

It was a magical halcyon time which no child today will ever get to experience. And I can say that now because I'm officially old (like over 30, closer to 40) and because it costs so much money to go to the bloody tip these days you're better off paying less for real entertainment. And also, because at 6.30 pm these days they insist on putting terrible current affairs programs or reality shows which tend to crush dreams rather than cherish them.

Now that I have girls of my own, I look for opportunities for them to nurture their imaginations and thankfully, Disney are still pumping out magic - albeit in different formats. The Little Mermaid, Pocohontas, Toy Story, The Lion King, Monsters Inc, Finding Nemo, Brave - these are all feisty tales where good triumphs, evil loses and a catch phrase is born.

The traditional and enduring Mickey, Minnie, Goofy, Donald and the gentler and darker tales of yore such as Mary Poppins, Jungle Book, The Aristocats, Snow White, Cinderella and so on are still lurking about the DVD shelves enabling me to share some of my fondest Disney memories with small people who can access children's television 24/7 if they want to do so. It's a different world. Not better, not worse. Just different.

Which is why it is exciting for me when shows like Disney Live! Mickey’s Rockin’ Road Show start touring and somewhat bittersweet when their best show of the tour is scheduled for the AIS Arena in Canberra. Mixing old school favourites with modern heroes such as Woody and Buzz and the awesome Jessie ensures that not only do I enjoy the show but my daughters do too and it means I have to return to the stomping grounds of my child hood and annoy my parents (lovingly). Win! Win! Win! 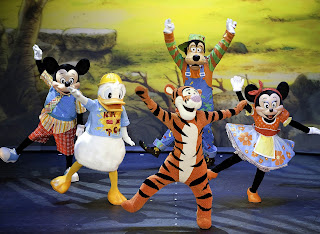 And even better - I've been given some tickets for the show at the AIS Arena on 9 February 2013 for a family of 4 (all sorts of family configurations allowed - under 12 months on a knee go free). If you don't win the tickets you can always do it the old fashioned way and just phone.132 849 or go to www.ticketek.com.au. Click on the picture above right to get more details on the show.

But back to the free tickets - if you want them - all you have to do is comment on this post citing which Disney character you would most like to sing a duet with, what song would you choose and why? Like if I wanted to win the tickets I'd say that I wanted to sing with Sebastian from The Little Mermaid, singing Under the Sea and its basically because I have an awesome little 'air drumming' routine which I am hoping will go gangbusters just like Psy's Gangnam Style.

And please enter and spread the news - get your friends to enter - otherwise my first sponsored post will be an abject failure and I'll feel terribly sad. And that wouldn't be very Disney now would it!?