Death on a wombat or happy birthday baby girl

Today the second born of my best girls turned one.  So as part of my modern mother mania where we like to create memories, moments and traditions - the fam plus Aunty Vicki headed off to Sydney Aquarium and the Wildlife Park for the day to celebrate the occasion.

And it was fabulous.  The dugongs were my favourite - only six in captivity in the world and we happened to be there the day the two in Sydney were best in show.  The girls loved anything with colour or that they could push their little faces against the glass in a communal saliva smear fest.   While my man was captivated by the underwater grace and majesty of the partner killing 700 kg crocodile, and my eldest toddler by the elephants (we have no idea - we didn't see any), the birthday girl was fascinated by three siblings playing in the photo booth outside the kangaroo enclosure.  Truth.

And because we are like that, we took a zillion photos trying to capture happiness in a snapshot.  The simple innocence of two sisters playing together on the younger's first birthday.  And so I present to you -


The Cassinator Being Choked to Death on a Wombat 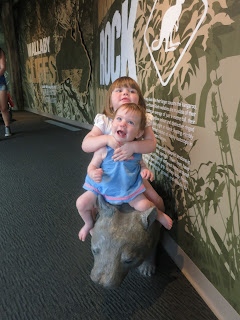 And after we rescued her from the deadly embrace and she coughed violently, regained her natural colour and returned to the business of breathing unobstructed, her sister and she toddled into Kangaroo land to eat dirt and generally be happy.