Brave when it matters 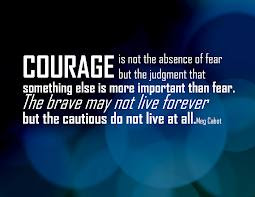 A few years ago a friend stood up to some badly behaving teenage girls who were terrorising other passengers on a bus he ended up being physically abused and left with significant facial scratches because they objected to his verbal chastisement about their behaviour.  We tutted.  And forgot about it.

Jeremy Fernandez was racially abused in February on a bus for not giving up his seat.  And the bus driver sided with the abuser.  We tutted.  We tweeted.  We forgot about it.

And now Yong Wang and Heidi are being vilified for standing up to a racist on a Sydney bus. We tutted.  We tweeted.  And now...?

People are posting hateful remarks on the video, perpetuating the racism and the man's right to say what he feels.  And mentioning the war.  Again.  And again.

You should be able to speak up when somebody else is speaking out in a way that is wrong.  You should be able to sit on public transport and speak in whatever language you choose.  And you should definitely not be abused because of historical alliances in times of long ago wars.  If this was the basis for abuse the English could go nowhere.  Ever. Like EVER.

Because the English were bloodthirsty and very undemocratic in their approach to entering other countries.  I think you could even say they were 'murdering bastards' and 'c__ts'.  Which isn't to say that as a history buff with some Irish heritage that every time I'm drunk and somebody speaks English on a bus I have the right to abuse them.

I digress (even though my point is valid)

Our media is full of the bullying epidemic, the oppression of minority groups as an expression of leadership, a disregard for people's human  rights which is shameful. We need to stop celebrating violence, we need to stop reporting on it in lurid detail so that such reactions are considered normal.  Because they are not.

Most, and I really truly mean MOST, people do not resort to physical violence if their words are challenged.

Free speech does not mean you have the right to intimidate or harass people on the bus. Or on the street.  Or anywhere. (And lets face it - if that is what you are saying for free, thank the gods nobody is paying you to open your mouth because you're obviously an idiot)

I read often of parents having to go in to bat on behalf of small people being bullied at school because the school discourages their peers from standing up for them and so they are being taught to stand by and say nothing so that they can't be accused of contributing to the problem.

WTF is going on?  Why are we allowing fear to flourish?

Is this the world I want my small people growing up in? No.  I want them to not bully.  I want them to never be afraid that opening their mouths in defence of somebody will result in anything but some name calling.  I want them to be good people who do not allow evil to flourish as Edmund Burke spoke about 300 odd years ago.  I definitely don't want them hit.  Or growing up in a world that thinks standing up to idiots makes you an acceptable target for violence and/or malevolence.

Basically I want them to be a Yong Wang or a Jeremy Fernandez.  I don't for a minute think they are perfect human beings all of the time so don't start bringing up their as yet undocumented faults.  But they were brave when it mattered.  And that is to be celebrated.