This weekend when we spent some time hanging out at Gran and Granpa's house, we had cause to wash our hands.

The Tullinator was fascinated by this square of white sitting on the basin.

Confused look on her face. She knows soap comes from a press pack either attached to a wall in a public place or in a bottle on the side of the basin if one is in a house.

She has no idea what "old fashioned" means but she's good like that, runs with an idea until such time as she's worked it out.

Not all that long ago, we're hanging out with the neblings and took them for a drive to somewhere we thought they'd find exciting. I can't remember where - but I do remember what they found the most exciting.

The fact that our car allowed them to wind their own windows down. That's right - our older car didn't have electric windows and winding the windows down kept them entertained for a very very long time.  Up.  Down.  Up.  Down. With our feet.  Using our elbows.  Woohoo!

And then we recently gifted a pull along telephone with an old school dial mechanism and a cradle to put the earpiece in.

It's a classic toy in that it has absolutely no relevance to the one year old that received it but they love the sounds it makes and anything that is pull along generally entertains small people. 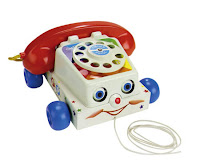 And it came in a box. Either way, the gift was surely a winner.

The fact is - things that to us were the everyday not that long ago - are already history for our children.

They are items of novelty. Hilarious. Funny. Enjoyable for being unusual.

And the fact that my childhood and even my teenage years are now officially the olden days is slightly bewildering.

What about you? What things have you discovered aren't instantly recognisable to smaller people?