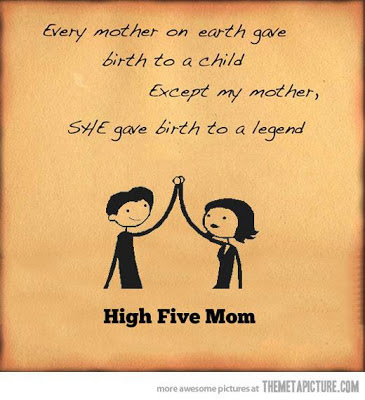 So it's Mother's Day here in Australia and as I am a mother myself now of two perfect children, I better appreciate how my mother secretly high fives herself every single day for having borne six perfect ones.

And I have five things I'd like to say to my mother this year.

1. I am really sorry that I bought you so much 4711 perfume when I was younger.  You got stacks of it for Mother's days, Birthdays and Christmases . I thought it was the height of sophistication at the time, in the same way I went through a stage of being attracted to boys that wore Brut.  I have no defence bar hormones.

3. I am still very proud of you for standing up to that truck driver that tried to kill us when we drove to Brisbane for Uncle Jim's funeral.  I wouldn't have wound the window down at all when he bailed us up at the petrol station, let alone wind it down far enough to basically tell him he was an idiot and shouldn't be allowed on the roads. And then wish him good day. It still makes me smile when I think on it.

4. I know you don't understand why with the extensive vocabulary I have at my disposal I profane as much as I do.  Let's assume it's nature not nuture and rest easy.  There is nobody but nobody that thinks for a minute my affinity for the profane utterance is a legacy of the maternal influence
.
5. We love you.  Having a mother that cared might have been an albatross when we were teenagers but is a blessing for a lifetime.