The love I can no longer say by name

It started off quite innocently as these things often do.  An older man. A much younger girl.

But it was okay in the beginning.  His long hair, strutting gait and piercing blue eyes were popular.

His words were quoted endlessly by not only me but my friends.  We loved him.

He had friends of all nationalities, was cool in a crisis and his tragedies made him seem somehow vulnerable.

He could quote Shakespeare and once did it for the best part of three hours.

He was all about family but yet could party with the best of them.  He was fun. Manly.

He was married of course.  My mother didn't like him.  Not even when I pointed out that he was Catholic with six children and therefore an excellent role model for a girl such as me. She thought I was delusional.

But I stayed committed, I endured his good times and his bad times.  In the 1980s, a devoted teenager, I scrapbooked his every mention but by the time he stood his drunken ground and poured vitriol upon the already over-demonised Jewish nation and the diligent police officers of America - I knew it was over.

I haven't seen The Beaver or Apocalypto. Me, who owned every single one of his videos - even the ones that terrified me; and I even found something positive to say about Bird on a Wire.  I sided with Robin in the divorce and felt for his children.  I didn't like the Russian and I wanted the recorded tirade to be untrue - and so stopped following the stories.  I was pleased for him that Jodie stood by him.  We all need friends.

Since his fall from grace, my Braveheart cardboard cutout from VideoEzy 1995 has stayed folded through several moves and an opportunity has come to pass him on to somebody that will appreciate him.  Even though only in jest, he'll have his moment in the sun again.

Never again will I be able to set him up by the front door so that a house mate or husband coming in late will be scared half to death by the man with the sword.  Never will he be the nostalgic ironic party centrepiece.  He will be gone.

Mel Gibson.  If only you'd turned out to be the man I thought you were. 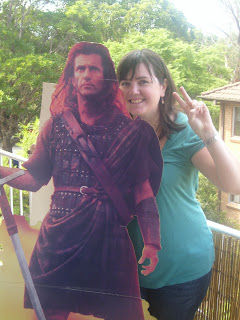