My sister the cancer beating ninja

I have two sisters.  They are very clever, very strong, very capable and very beautiful.  And short.  They are two of my favourite people in the world and there is nothing I wouldn't do for them.  I don't even hate them for being clever and beautiful  because I got the personality and the sense of humour and everybody knows that's what people prefer.

For context - I also have three brothers.  We are organised neatly - boy, girl, boy, girl, boy, girl.  We love each other all the time, even when we don't like each other. We three sisters are very close and have been since they stopped being irritating.  See, my sisters are both younger than me.  They are Little Sister and Baby Sister.  This story is about Little Sister.  Or as I like to refer to her - 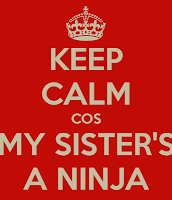 Late last year - while not quite three quarters pregnant, she was diagnosed with Oro-pharyngeal (throat) cancer which was also doing a nasty little dance in the lymph nodes in her neck.  And so, when she reached 30 weeks of baby-growing, to maximise her chances and the baby's chances, her little Baby Ninja was birthed surrounded by more medical staff than an episode of E.R.  And then J-Wren commenced 8 weeks of ritual poisoning and nuking known as chemoradiation therapy - a process which from the outside looks like no fun at all and she reliably informs me - isn't that much fun from the inside either.

And through this, her Baby Ninja was hanging out in the early baby part of the hospital getting her growing on and generally being ridiculously cute.  And then she came home.  And the race to become the first to eat solids began. And even with the poisoning complete, the healing still had to be done. And the new parenting still had to be done.  And life still had to be done.  And the Daddy Ninja through all of this was fierce, and strong and very loving and J-Wren's family have all been very thankful for her good sense in choosing such an awesome partner.  And we've all been very amused by how the most reserved and cool couple of the six have become completely gaga for Baby Ninja from day one.  Totally ruined their street cred for life.

And now we are in the "all clear" bit of the journey.  The bit where officially she has kicked cancer's butt so hard it's gone home in a massive sulk.  And she continues to heal, to mother, to partner, to live.

I have been so proud of her during this shitty shitty time.  Despite her attempting to have us both killed by arguing with armed border guards in Central America or making me sleep in brothels because she was too cheap to pay the extra 30 cents to stay in an actual youth hostel while we were backpacking - I love her very much. She's always been strong but because she is quiet, people refer to this as 'focussed', 'determined', 'resolved' whereas the same trait in me is described as 'stubborn as f**k' and a 'right pain in the arse'.

This is not the introduction to parenting she and the Daddy Ninja had planned.  They were going to birth to whale music and breastfeed until they were 47.  They were going to frolic in gardens full of hipster music and travel with baby attached to the back with sarongs and good wishes.  Instead, their lives for the last six months have been highly medicalised, hospital focussed, poison filled, immunity compromised, terrifying, uncharted and unknown.  Much more the journey of Columbus than the nightly Manly ferry.

But her resilience and her ability to adapt, to question, to learn, to roll with the punches, to embrace thankfulness, to love, to push through has been truly inspiring.  Her lack of 'Why me?' - there has been sorrow but no futile ranting at the universe (though I think it fair to say her parents, siblings and friends have battered the universe on her behalf).  She accepts it is bad luck, that she, the second healthiest of all the siblings, has just been dealt a really crappy card.

And here she is, at the other side.  Skinnier, hungry, battle weary and hopeful.  Fierce as always.  Doubly appreciative of husband and child.  Much loved and unable to cough without her entire circle of family and friends morphing into 'caring mode', something she will just have to accept for the next 50 odd years.

Strangely, it's taken most of the time she's been sick for us to get in the habit of using the 'C' word.  Cancer is ugly. It's an ugly word.  It's an ugly disease.  And its a really sneakey f**ker.  It's not like she was doing anything cancer 'causing', it just turned up uninvited and changed the world.

So, in appreciation of where she's got to and acknowledging that she's done something 'not fun', I'm committing to doing something 'not fun'.  This isn't on my bucket list and if I was going to do it I probably would have done it back when I was twenty kilograms lighter, twenty years younger and well, fit. But I kind of feel that to do nothing would be a little unappreciative.

And you have to sponsor me to do it please so that we can cure cancer and nobody else's sister has to go through this.  Or brother.  Or father, mother, aunt, uncle, friend, lover, enemy, child.  Because Cancer really blows. Like big time. Even when you're a ninja.

You can sponsor me here please: Only for my sister would I do this running caper