The gross things I do for love.

To set the scene:


What the CCTV would have picked up: 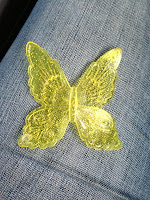 And all for these (see right)

That's right, I was on the hunt for a pair of missing Tinkerbell wings.  And even better, I found them UNBROKEN where they must have fallen from the car last night as we returned to Vivid.

As I drove along I was thinking wryly, the things we do for our kids eh?

And then I thought - actually - I do a lot of really gross things for my daughters which I would do for NO OTHER PERSON ON THE PLANET.  Not even my beloved beautiful man.

1. I grew those girls IN MY BELLY.  Which even if natural is weird, gross and eventually hurts. A lot.
2. I am nice to them even when I don't feel like being nice - which is more often than they will ever know because I want them to take love for granted.  Unfortunately my beautiful man doesn't get the same courtesy, but he doesn't offer it either.  We're in agreement on this one.
3. I eat food they have taken from their own mouths and put in mine because I appreciate that they are LEARNING TO SHARE.
4. I wipe their noses with my fingers if tissues aren't immediately at hand rather than have them eat their own snot because eating snot IS GROSS. Yes, grosser than wiping noses with fingers.
5. I change their nappies, wipe their butts and applaud them for bowel movements and I do not put pictures or stories of their poop in any form on social media. I don't even blush any more when they applaud me back in public toilets.
6. I play games with them that are REPETITIVE AND BORING and basically suck (nearly EVERY game a 1 and 2 year old like comes into this category) and I pretend they are fun because I know that the little things are the things that matter to little people. They don't give a rats bum about being fed, housed and all that malarky.
7. I hold their feet because for some strange reason it soothes them when they are tired and cranky.  Feet are not my thing.
8. I let them kiss me as if they are trying to drown me with saliva and food scraps and I don't even say YUK which is more courtesy than they'll get snogging boys later in life.
9. I never sleep the way I used to sleep and the way I want to sleep because they don't do sleep properly yet but they are only little for a short period so it seems churlish to BITCH OUT LOUD.
10. I make food that is good for them even though I hate it because that is what PERFECT MOTHERS do and I think it important to fake it sometimes.

So basically - those girls have me totally sussed and I don't even care.  They do things that aren't gross but on balance, non-gross things aren't really toddler approved activities.  And thus it goes.  And I remain inexplicably, totally, embarrassingly in love with them regardless.