How 9 years ago I didn't fall in love with Nick.

In the June of 2004 in South East London, as I sat upon the sofa of my new house share, gormlessly starring at the TV, munching popcorn (because not uncommonly at this period of my life I was living on popcorn and water for a couple of days prior to payday),  a cute male bum temporarily obscured my view.

Now I had only been in that house a few days, so unfamiliar backsides passing through the lounge room were not uncommon. But cute backsides on tall slim men with soft brown curls and the most incredibly pale blue eyes were much less common.

And just back from Glastonbury. 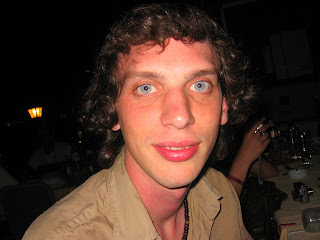 Did I mention? Very handsome.

And disappointingly - my house mate.

So very very very unsuitable on so many many levels.

You know the rules.  Whatever else was a pro or con, he was a house mate.

And I was moving back to Australia.

It was agreed.  This will NOT happen.

A month later, having become friends, we kissed for the first time and he promptly turned, threw himself over a fence and we agreed that we could NEVER take this any further.

A girl has her pride.

And now, that girl has a bonafide husband and two daughters.

I blame him.  And my lily livered Pride.

He may be right in every way.  Infuriating.  Pigheaded.  Procrastinating. Painful.