Today, three families took advantage of free children's entertainment at the local shopping centre which was celebrating it's third birthday by giving free stuff to customers.  In fact, we took advantage yesterday and snuck in a meet and greet with Dora.  Free entertainment featuring much beloved characters should NEVER be underestimated.

So today, there was a Peppa Pig concert and the small people were transfixed (mostly)... 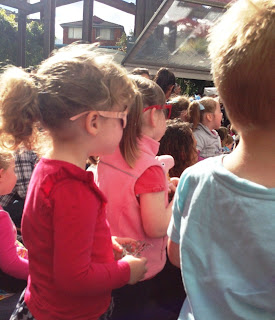 And then with happiness in our every step and adorability factor at an 11/10, we went up to have our FACES PAINTED.  This is the equivalent of scoring free wine at a free gig.  Or as my grandmother might have said 'the icing on the cake'. 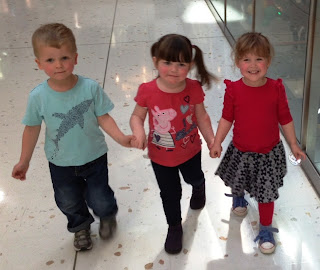 And then we had to queue.  Which was a bummer but my grandmother probably also said something like 'there is no such thing as a free lunch', which might be translated into something like people getting free face painting shouldn't expect no queues as well. 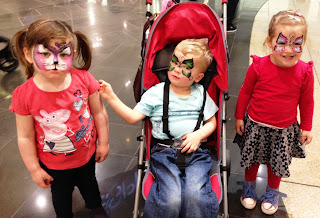 But with such talent came a slightly longer than average 'time per face', so even though we were fairly forward in the queue it was taking a while.  And as I do, I got chatting to the lady in front of us in the queue and said 'there will be child biffo if the line doesn't get a move on', and she laughed and said 'or parental biffo'.  And we chortled.

Two men at the front of the queue started yelling abuse about whether one had pushed in and what appropriate queue etiquette was and how many places you could 'hold'.  And the lady and I smiled wryly at each other and turned our little people's heads away from the silly men.  All of a sudden, there is a push, the shouting gets louder and there is chest bumping going on.  Wives are looking embarrassed, a man is intervening to stop the guys beating the shit out of each other, security is being called, the face painter is looking anxious, children are being bustled away from the front of the queue, casual observers vanish and we are all left looking at little perplexed about face painting escalating into violence.

No, you shouldn't push in.

Yes, you should challenge idiots.

Actions which result in your children missing out on a face painting experience they have just queued for is NOT A GOOD EXAMPLE.

People are baffling.  And face painting?  Well that shit just got hard core!