I've said it before and I'll say it again, I love social media for a lot of reasons.

But there is one thing I hate about it.

It gives a voice to bigots.

I've been really pleased to be contacted via Facebook by people I was genuinely fond of in my younger years.  Except the people who I find out within 48 hours are racists or homophobes.  Bigots with a capital B.  Absolute tossers when it comes down to it.

And I am always genuinely saddened by this realisation.  Because if they had come up in conversation, or via a shared connection, I would have been really pleased to hear their news, perhaps reconnect.  And in the course of conversation, our fundamental views on the world would never have come up.  And that is the nature of small talk and shared memories.  You don't delve deeper - there is no reason to do so.

But with Facebook, or Twitter.  There is no "OMG IT'S BEEN LIKE A BILLION YEARS WHAT HAVE YOU BEEN UP TO TELL ME EVERYTHING", it is more 'Ah.... Bill.... he was a lovely fellow - I'm definitely accepting his friend request' and then you log in the next morning and it's a series of 'Fuck off Australia is full' memes, coupled with a tirade against the illegals or that the gays are trying to donate blood so we all become gay and it's a complete conspiracy and by the way -Obama is totally a Muslim and a Kenyan because my mother's brother's best friend's goat's cousin's drug dealer saw the birth certificate.

And then I have to unfriend immediately.  But in addition to that, an earlier memory is ruined by the fact that I never really knew them, or knew myself.

Harder, more ambiguous, are the friends that you have met later in life who have been great and you miss having around now that you are scattered around the world and then one day you open your feed to find a plethora of ill informed jokes about religion, culture and colour.  And want to defriend them immediately, but you give them a few more chances because you really really really want to be wrong about them.

You want them to be having a moment of oops.  Where their interpretation of a joke was slightly off, or nuance means that they saw a different message.  And then they use the word 'boong' in a status or rant against the 'illegals' and you realise that truly, they aren't who you thought they were. 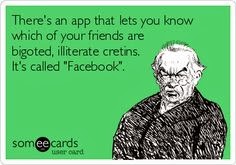 And you'd love to pretend it never happened.  But the fact is - to say and do nothing is as powerful as if I sent them the KKK secret emoticon.  Silence is an endorsement.  It's powerful.  People fill silence with the messages they most want to hear.

We are all learning.  I have no doubt that the younger me was less informed, more close minded, than the person I am now. I probably never questioned the casual jokes, the general stereotypes, the misinformation.  But as an adult, a functioning involved rational adult, I perpetuate everything I don't challenge.

I'm still learning, I'm still coming to a greater understanding of the world.  But I stand firm in the view that bigotry, in any form, in any context, is still bigotry.  And we must be active about eliminating it, in whatever form it takes.