If you don't do something, who will?

Do you know Martin Niemoller?  He was a German pastor who during the 30s supported Hitler and who grew disillusioned with him not because of the erosions of freedoms accorded to others, but because eventually the new way of doing things, impacted on him and his ability to practice his faith freely.  He spent the war in the Dachau concentration camp.

Stay with me.  I'm cranky and I have a point.

Just after the war he said this:

Originally he said it a more complex manner giving examples of times when he and others had heard of harm being done to others in small ways - changes of policy, attacks on journalists, removal of documents not seen to fit with the new world order, and he spoke of it 'being none of their business'.  Until it was.

I am not claiming we are on the road to being the next Nazi Germany.  So calm down.

What I am saying is that it is our business.

We live in a thriving economy.  And for every bit of pro-Liberal anti-Labour propaganda you can quote me, I can find equal with the opposing view.  So leave it.

This applies to all of us, all of the time.

It is what we are allowing to happen in our name because it does not directly affect us.  The attacks on the ABC and SBS are frightening in that people who only read Murdoch presses feel very strongly that the ABC is too 'depressing'.  It is depressing.  Because it's the truth.  Our country is going to hell in a hand basket and too many of us don't give a shit because it doesn't affect us on a personal level. 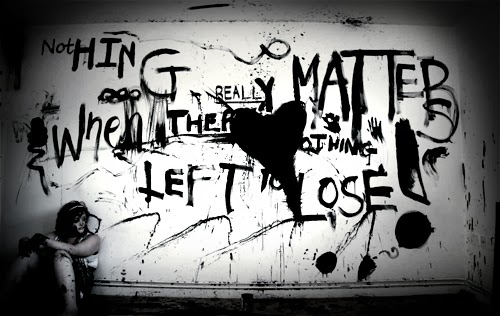 The issues around the violations of the human rights of asylum seekers - we have been shown to be pro-actively violating 150 individual thingies and yet we don't take the time to write and say 'Oi, not in our name' but we have plenty of time to write to our health insurer and complain about the rude lady on the counter

We send our Navy into international waters and yet more refugees arrive by plane than by boat and yet we keep regurgitating the same incorrect sound bites being spouted by the politicians without taking the time to research the facts.  Yet we have time to research the 20 stupidest things said by celebrities.

People seeking asylum are coming from countries torn apart by war, governments which sought to silence dissenters and places our own government suggest you don't visit as an international traveller because it's really bloody unsafe.  And yet we scream - "OOH, why didn't they stop in Indonesia or Spain, why keep coming here?"

Ever think that perhaps they are prepared to risk everything to be as far away as possible from the places they feared for their lives?  Ever think they read about our country and the liberties which we take for granted and think "Wow - how awesome would it be to call the Prime Minister an arse and not get shot for it.  Or have my family killed so I shut up in the future"

Marriage equality.  Mothers of a certain age would prefer their children to marry their partners and not just live with them, because marriage means something and yet they cry out "Why can't them gays be happy with a civil union?".  Why does it matter to you?  They're not marrying you.  But yet, while it doesn't affect you, you want it not to happen because we are a "Christian country" and it's unnatural.

Um, no. Firstly, countries can't be religious. They are a land mass.  Plus church and state should be separate.  Makes sense since we don't all believe the same thing and the law of the land should apply to all citizens not just the ones we deem acceptable to our own personal belief system.

Secondly or thirdly, whichever point I am to - unnatural? If you took advantage of the pretty decent education you got in this country irrespective of gender or religion you'd remember that very recent history says that marrying 'people of colour' was a bad idea.  Who looks stupid now eh?

The dredging of the reef for financial gain, the denial of climate change, the eradication of any mention of Gonski on the website, politicians that defund services to society's most vulnerable and yet give themselves pay rises. All these small things erode our democracy until we are living an illusionary freedom.  Because it hasn't yet affected us.

It's none of our business.

It doesn't affect 'us'.  It's all those bloody lefty foreigner loving bleeding heart do-gooders.

Yes it does.  And if you cant see that the insidious erosion of the very things that make us a humane and compassionate society IS your business, than please, know that you're an idiot.