The letter I never read

When I was in Year 6, we all had to write a letter to ourselves to open when we were 21.  I don't remember the exact things we were to include but it was about what we thought our future selves would be like and what we were like right then in 1985.

I sealed that letter up, took it home and gave it to my parents.  They put it in the study under the green vinyl divan in the storage box which was the great repository for all important documents we didn't want to lose.

Guess what? It got lost.

Somewhere between 1985 when I wrote it and December 1995 when I turned 21, that letter went astray.  Probably tossed out as not important, a small letter in a small envelope, addressed to "Alison", insignificant among the sea of documentation that lived under the divan and which would have had to be sorted when the divan went to divan heaven.

I often wonder what I wrote in that letter.  Judging by a couple of my short stories that have survived from primary school it is entirely possibly illustrated beautifully like this: 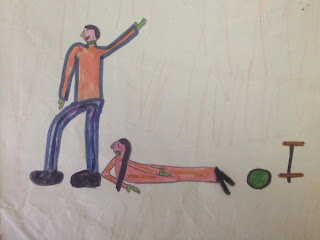 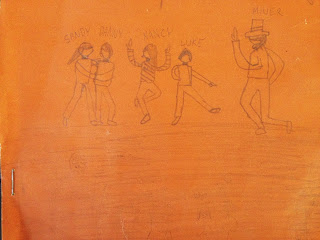 Or perhaps it had a confusing 'summary' like this book jacket where I seem to have written a book that advocates incest and babies as the route to happiness: 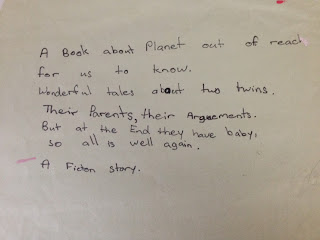 Or maybe it's as thrilling as this little play: 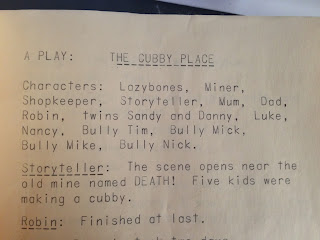 I won't ever know where my ten year old self was heading or what I thought I might have achieved.  I suspect that it was best I didn't know how turbulent the next ten years were going to be and how confusing and terrifying growing up was rather than a raffish adventure like Nancy Drew would have had.  I wouldn't have known about the friends I was going to make that I still have, or the mistakes that I would make that still impact.  I did not know how much I did not know.

1985 was the year I read Watership Down and wasn't part of the special group invited to watch Genelle and Daniel 'pash' at lunchtime on the obstacle course. I had one older brother and four younger siblings and didn't feel I fitted in anywhere.  I read a lot, wrote a lot, dreamed a lot.  I got my first pair of jeans, a love affair started by a cousin named Sue, that has lasted a life time.

Mrs Hinton set a homework assignment that required us to answer ten questions about 'A Country Practice' and Dad thought I'd made that up as an excuse to watch a forbidden TV show, so I failed my homework and was publicly outed as the only kid in Year 6 not allowed to watch that particular show.  Arthur lost his temper and threw his chair out the window and I was hugely impressed by his daring.  I had a crush on a tall, gentle guy called Michael, and Mr P, the coolest teacher I ever had, called my parents in to discuss why I used the word 'ejaculated' in my fiction writing.  My naive, book obsessed ten year old self, used it quite innocently in the context of "saying something quickly and suddenly" not in relation to semen.

In hindsight, that was probably a very discomfiting discussion for my parents to be having. I suspect they weren't congratulating themselves on having a child with such an extensive vocabulary.

It snowed on my December birthday that year quite randomly and I was excited about going to high school the following year. I liked riding my bike and going on adventures. When I look at the handful of things I remember from that year, I can't even begin to imagine what I wrote to my older self but I'm prepared to bet it used big, beautiful and possibly age inappropriate words.

I hope it dreamed big.  Really big. I really do.

Did you ever write to your future self?  What did you say?