The liberal party is my friend

The Liberal Party is my friend.  True story.

I'm an extremely white (it's the Irish genes), middle class, married, heterosexual female with two non-school aged children.  I am married to a white immigrant.  We live in Sydney, have plenty of access to water when we need it, are employed and have no disabilities.  Neither of us have parents requiring aged care at the moment, aren't using schools and it benefits us to have the child care workers paid as little as possible to ensure our child care fees stay down.

While my backyard is located in land that used to belong to the Wallumetta people, it's not my fault that it was given to John Doody shortly after European settlement and I am just generally thankful it has no coal so Gina doesn't want it.  When you think more broadly, I've been to the Barrier Reef so if it gets wiped out, I've got the photos and while I want my internet to be faster, I can always move to England if this becomes the one thing that will improve the overall quality of my life.

I have no good reason not to support all the things the Liberal Party is doing, because even as they systematically break nearly every one of their 'core' pre-election promises - I am not affected.


Well except for the traffic in Western Sydney which I was assured would be fixed if they stopped the boats.  Apparently the boats have stopped but traffic in Parramatta is still a nightmare.

And that's why I marched in march.  I'm really cranky about that traffic.

I marched because it doesn't matter which government you choose at the moment, they are lacking inspirational, compassionate, economically viable policies which benefit the people and the environment we live in. We are systemically destroying the future of the country by pandering to an already wealthy elite.  We are choosing greed over need. We are asking what is in it for me, not what is in it for the country as a whole.  We should be prepared to pay more taxes to protect our environment, to have the first Australians' recognised, to support our farmers, to pay for quality care for our ageing population and our children, to pay for good educations regardless of public or private, to care for people seeking asylum and etcetera. 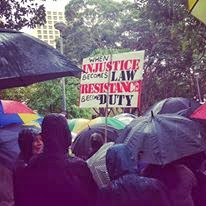 We should not mistake populist patriotism for fact. We should be prepared to say that democratically elected or not, the government is not speaking on our behalf. And while I am personally not a fan of Tony Abbott, we need to stop hating the figure heads and remembering that whether it's Tony or Bill or Kevin or Julia or Clive - they are figureheads for their party and they do not exist and they do not speak without the support of their parties.  And lots of speech writers.

March in March is just like the 'Convoy of No Confidence' of a few years ago.  It's not just leftie do-gooders that like to have the odd protest. The right like to do it too.  That's the beauty of democracy.  Everybody can have a say.

But when conservative police estimates predict around 100,000 people across capital cities and small country towns turned out to say 'Not in my name' and the media forget to report it - you know that you are living in a country that is not as free as we believe. In fact our democracy is tainted and manipulated.

And that is why I marched.

Because cynicism has no place in justice

Because apathy is complicity.

Because I have the privilege of being able to speak up, when so many don't.

And ultimately, because I didn't need to do so.  And may I always be so lucky.