I am the snorer!

Thank you very much.

If you have ever blamed your lack of sleep on the snoring of your partner/child/housemate/dog raise your hand.

The guttural vibrations of the respiratory system are not the reason you can't sleep - it's because you're crap at sleeping.  People that sleep properly are fully immersed in dreamland, hearing nothing but the terrified shrieks in their never ending nightmares involving elephants in pyjamas or the soft lilting of Taylor Swift in their happy ever after dream of Ryan Gosling.

And we all know that the only people who are bad at sleeping are those with guilty consciences.  Whether it's Catholic guilt, High Anglican stoicism or Atheist panic, it chisels away at night time serenity, leaving the poor at sleeping cranky and unable to accept responsibility for their inability to master this most basic of functions.

They lie there gritting their teeth, knowing that they would be younger, fitter, smarter, thinner, wealthier and generally happier if the snorer just stopped.  Those that haven't abandoned all hope of getting better at sleep will poke the person or shove them over until they lie on their sides, dulling the rhythmic roar to an irregular snuffle and taking that opportunity to enter the appropriate REM cycles.

Because everybody snores sometimes.  Colds, booze, a funny sleeping position, a pea stuck up the nose that you haven't yet discovered - anything can make somebody snore.  But proper sleepers rejoice at these very real demonstrations of your life and vitality and close their eyes and wander off into the land of nod.

People that sleep, perchance to snore, really don't give a rat's bottom that you have been kept awake by their snoring.  They pity your petty complaints and generally ignore your gnashing of teeth and renting of cloth because it's not their fault you haven't learned to sleep.  They know that you are jealous of their well honed ability to sleep and then enjoy the next day, fully refreshed by the tantalising thread of a dream where they defeated the pyjama clad elephants while riding Ryan Gosling, or riding pyjama clad elephants with Ryan Gosling.  They're not quite sure, but it's left them happy enough.

So bottle up your bitching poor sleepers.  Go practice the art.  Close your eyes, close your ears and if the sound of your partner reaches levels which allows the neighbours to put in a formal noise complaint, you won't care.

Because you'll be asleep.


****
Do you enjoy Talking Frankly?
YOU HAVE UNTIL 5PM TODAY
TO VOTE FOR ME IN THE PUBLIC CHOICE ELEMENT
OF THE AWC BEST AUSTRALIAN BLOG THINGAMAJIG. 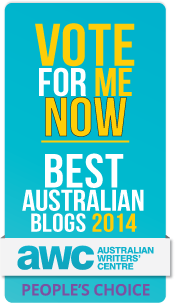 ****
Got an amusing post, old or new?
Link up below, spread the word and have a giggle on Monday!
Michaela from Five Frogs Blog |  Emily from Have a Laugh on Me | Kimberley from Melbourne Mum | Alison from Talking Frankly | Vanessa from 26 Years and Counting |  Rachel fromRedcliffe Style