A kick up the butt

Those were the three words that I chose for 2014.  For those that want to know why, I refer you back to this post from January.

And I don't mind admitting - it's not all gone to plan.  In fact, this picture I stole from a friend's Facebook page sums it up perfectly. 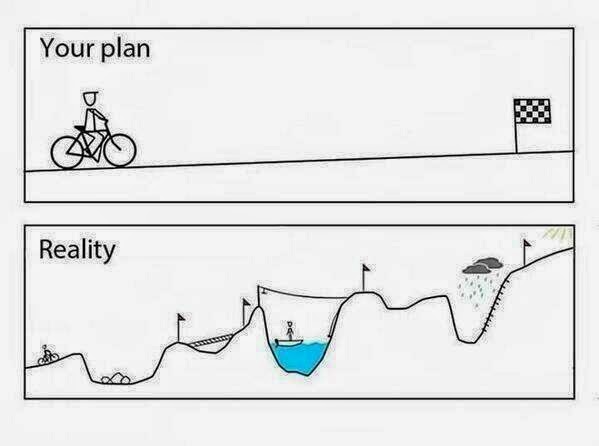 I've been dancing with the black dog more than I would like to admit, cried more tears than I thought the medication would allow and I have seriously doubted myself afresh.  I have been tremendously and generously supported by my husband, my family and my friends, but it's been a fairly lonely journey in parts.  Working from home has it's benefits, but it's not so great when you're a person that draws their energy from (or submerges their own crap under) the wondrous chaos of 'other people'.

So my belief has been shaken, my dare turned into caution and my roar was more of a whimper.

And in the last month or so when perhaps I was at the lowest I have been since the dark days of post natal depression, my psychologist sent an email to see if I was okay.  That woman is GOOD.  Or she's got a camera in my house.  Either way, I realised that I'd stopped actively managing my mind (and it's entirely possible she was reading it).

And then I got a couple of jobs I'd been waiting on.  Finished a course that has me excited about the possibilities again.  I admitted to people that I was not in a great place. Things were starting to wobble along in the right direction again.

Then I won a free copy of Kelly Exeter's book 'Your Best Year Yet'.   Her dedication at the front of the book is 'To Ant - for being you.  And for loving me, even though I am a massive pain in the arse'.

If that's not a call to read a book I don't know what is.

Now on the face of it, Kelly is not a person I have a lot in common with.  She did triathlons competitively, she's a bonafide introvert and she's clearly much more of a Type A personality than I will ever be.  But as I read her book, which explores changing your thinking, I kept having the 'I KNOW THAT' moments.

It's like my psych got in touch with her and said - how about you send Al a book to remind her not to be a completely self defeating arse. (Not my psych's words - she's very professional, nurturing and clever - but we are agreed that self awareness is actually a strength of mine so I don't mind paraphrasing).

Kelly writes in her book that "a lot of time, our fears can be boiled down to what other people might think of us".  She writes about wobbly courage and notes that "nothing ruins a good year more than letting fear rule your life." And then most tellingly, rather than asking yourself "What's the worst that can happen", asking yourself "What's the BEST thing that could happen?".

And as somebody with incredibly low self esteem, a thousand internal voices and a ridiculous amount of personal pride - I did some uncomfortable squirming as I ate my lunch with my hand and turned the pages with the other.

Awkward basically.  Self awareness can be a bitch.

Mental health is a tempestuous beast.  But ultimately, you've got too stay on top of that baby.  You have to believe. To dare. To roar.

So I drew a line.  I put the book on the shelf and paraphrased Kelly's good sense as "You don't have to be Chuck Norris you daft eejit, just yourself - the awesome version."  Hell girl - you just gave up drinking Red Bull (which is described as 'canned Chuck Norris wee') - you're ready!


PS: The awesome version is also a pain in the arse sometimes.  Sorry beautiful man.