I have done a bit of research before commencing part two of the #pbevent blogging challenge - Food Blogging - and I have to tell you that something all food bloggers seem to have is a genuine passion for cooking.

And by passion, they really really really really like cooking. A lot.  And experimenting with food.  And tastes.  And textures.  They cook for fun not functionality.  They cook because they genuinely enjoy it not just because they recognise that while surviving for weeks on popcorn, bananas, toast and cereal is a suitable way to make it through fifteen years of independent living, you can't bring your children up on that.

And the reason women get fat when they move in with their partners is not love. It's because they're eating more than popcorn, bananas, toast and cereal and pretending to be grown up.  It's a freakin' conspiracy I tell you.

All of which indicates to me that food blogging is going to be harder than fashion blogging.  Because I have less interest in food than I do in fashion.  Mainly because I can cope with being hungry but I really hate being cold.

That said - sometimes this happens. 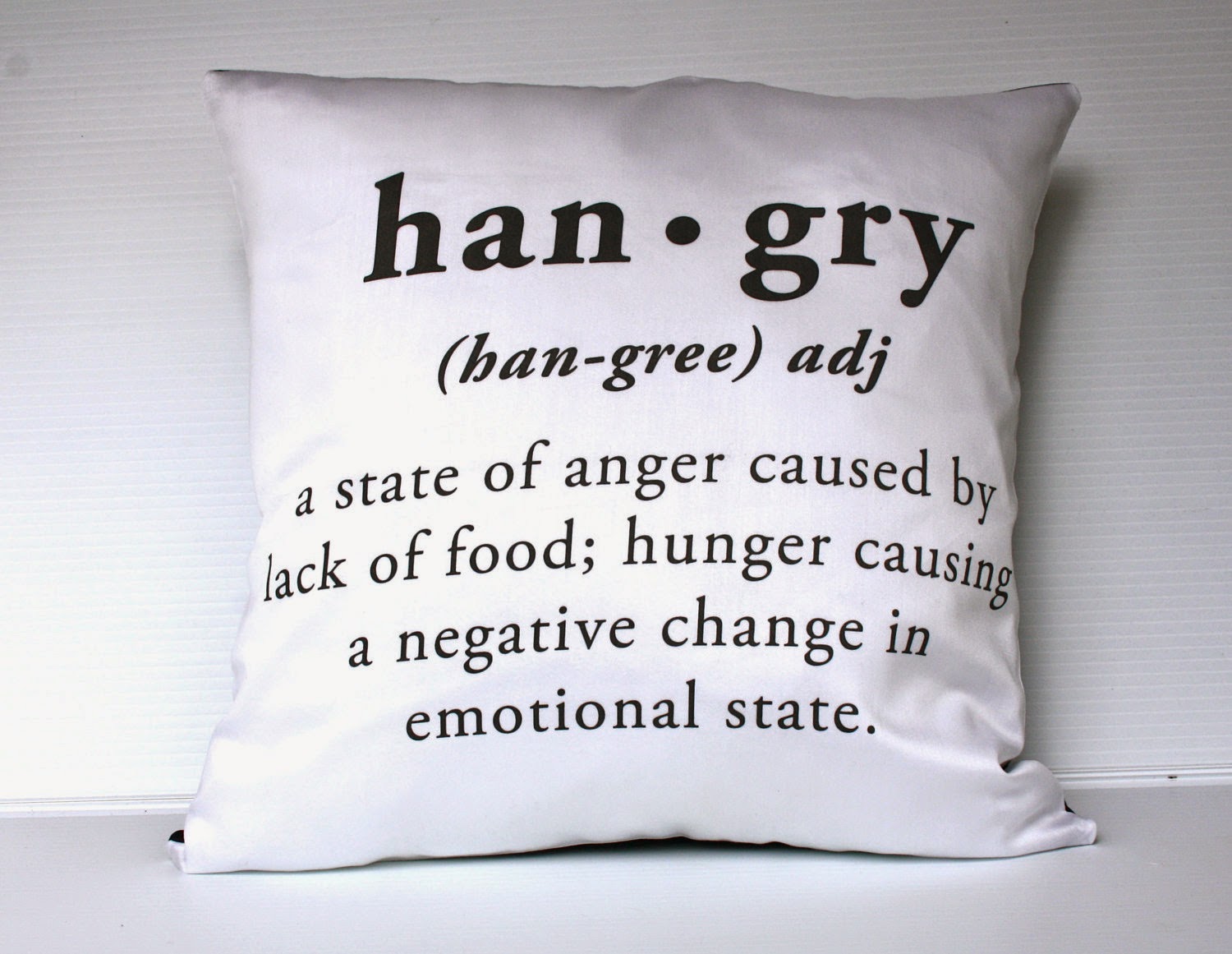 In fact my second blog post ever - read by nobody - Judge me if you like but I don't like tuna kind of sums up me and food.  Fact.

Now I checked with Delia on the accuracy of hotpot vs stew vs casserole on this and method matters but I'm more concerned with alliteration.  So I've gone with stew.

First step is have a slow cooker.  The best way to get one of these is have a baby and if your friends are of the absolutely ace kind they'll buy you one as a gift.  Mainly because they are concerned you might try bringing the child up on popcorn and bananas - but no matter.

Wipe the dust off the slow cooker.  Plug it in.  Turn it on at the wall - this is essential for it to actually work when you turn on the actual slow cooker.  #tipsforbeginners

about 700 grams of fat sausages
1 brown onion
1 spoon of honey
vegetables - I went for what I had in the house - so 1 medium sweet potato (peeled and chopped into chunks about the size of a bite sized Milky Way), 4 - 5 carrots (peeled and chopped), some frozen corn kernels, some frozen peas, about half a punnet of grape tomatoes
1 Masterfoods Sausage Hot Pot recipe base
some water

Brown your sausages.  This involves frying them in a pan until they are brown.  I'm never sure if they are supposed to be brown only on the outside, so I generally just cook them through, because the idea of eating raw meat makes me gag and I have never got around to googling the answer to this one.

Then you chop them up into chunks.

Chuck all the vegetables into the slow cooker 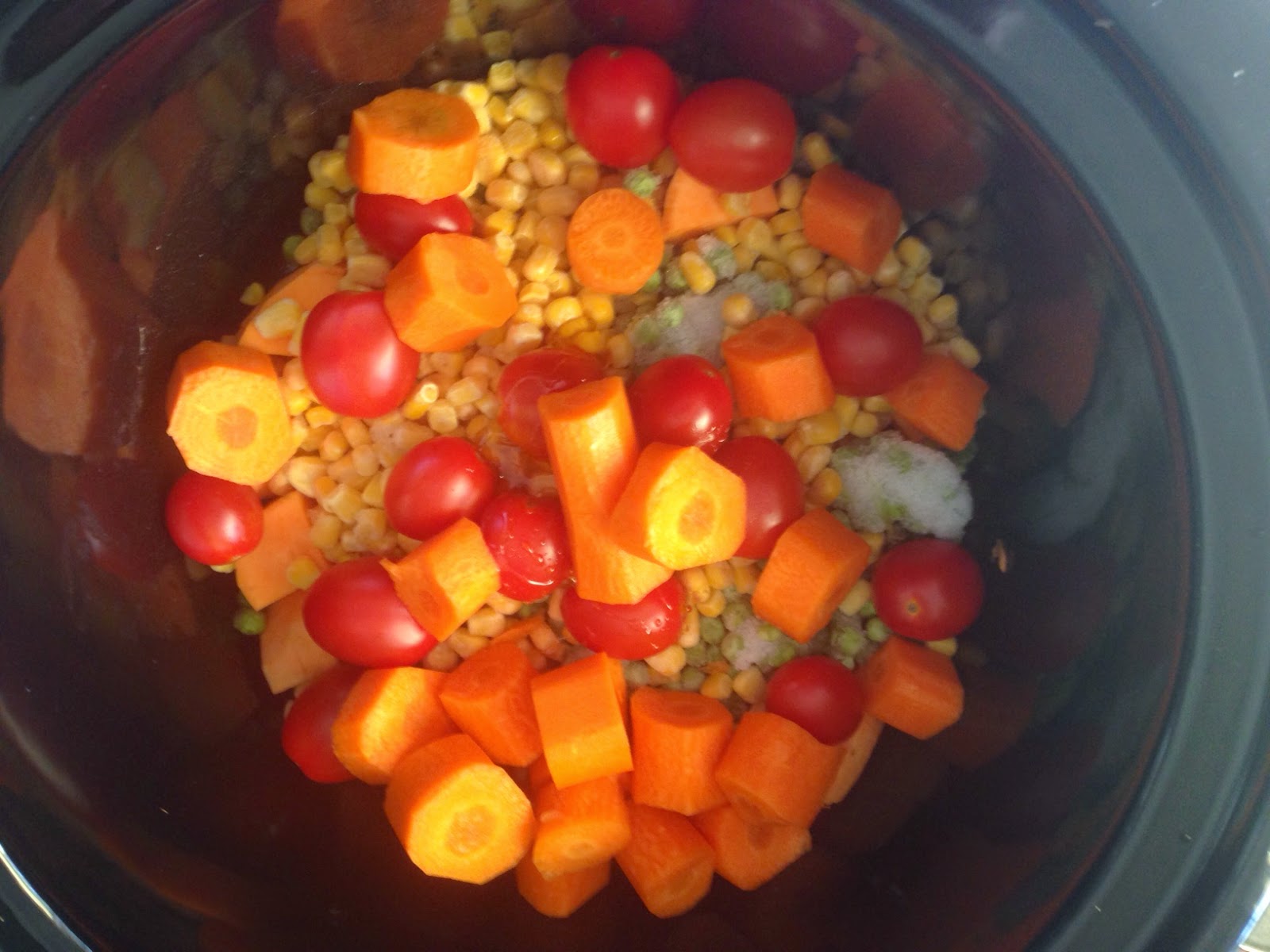 then throw the chopped sausages on top dollop in the honey 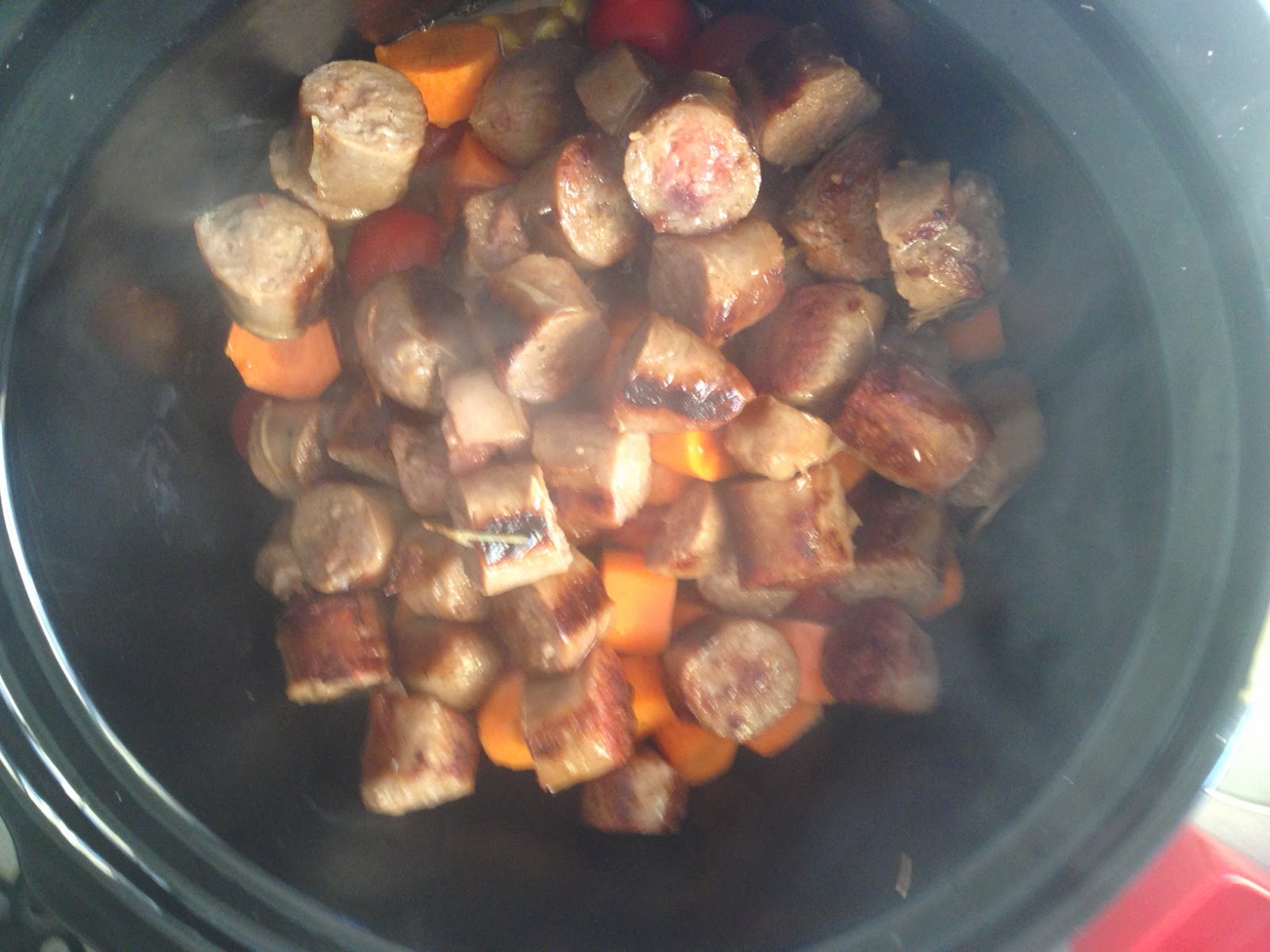 pour about 500 grams of water on top, tip in the recipe base from the packet.  Stir. 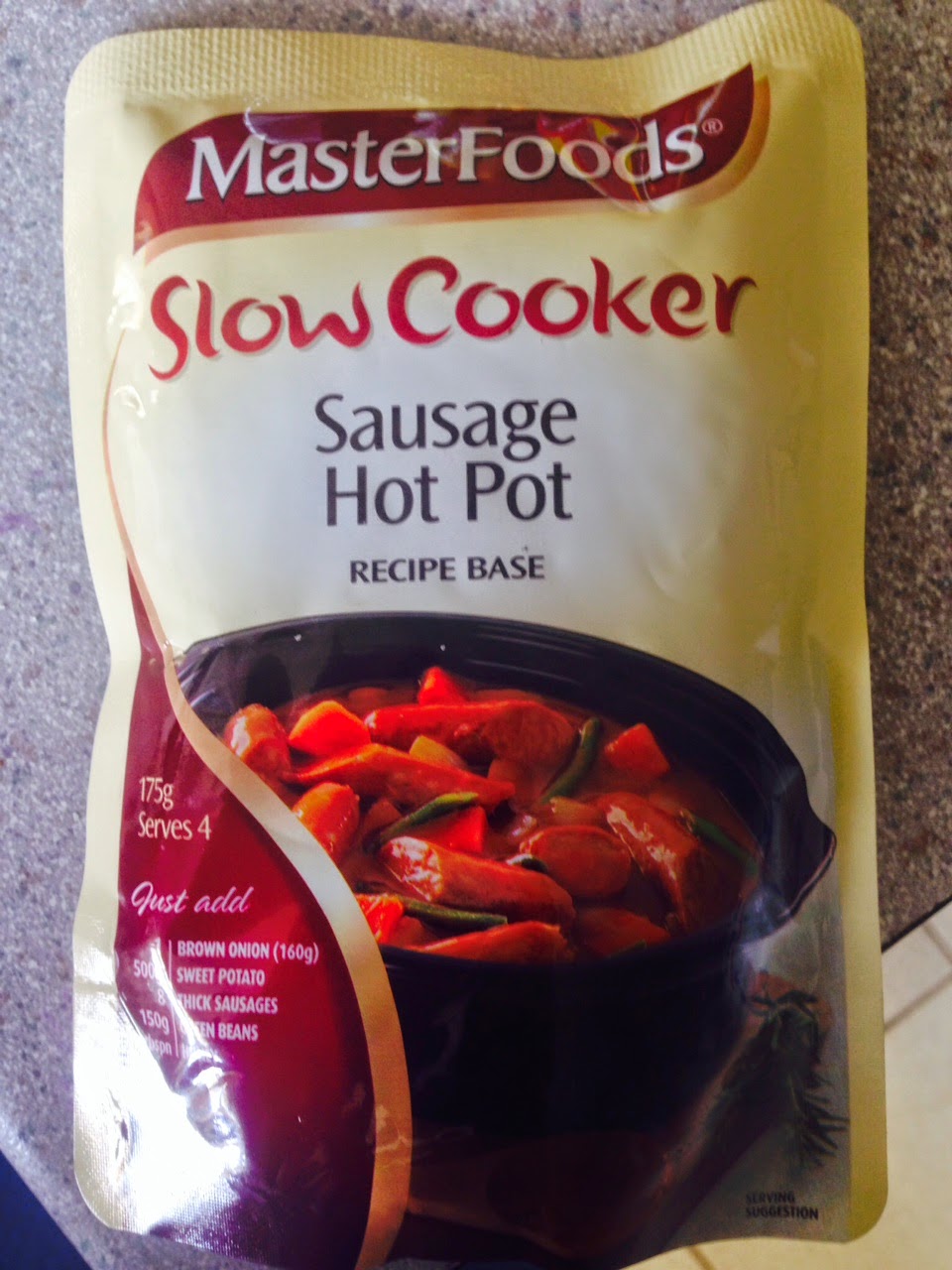 Serve with either rice, pasta or fresh chunks of bread to mop up the sauce.  Or nothing.  It's plenty tasty enough so you'll live without accessorising.

Make a plate of weetbix for the younger daughter and a plate of porridge for the elder daughter when they refuse to eat it because today they absolutely hate (insert whatever vegetable they are currently trolling) and you can't be bothered arguing because you know they ate like demons at childcare.

Bung the leftovers in a lunchbox and send with your husband to work the next day.  You can always pop some kernels and eat a banana if you need lunch.

And there you have it.  Dinner.  In a slow cooker.

Am I sponsored by Masterfoods? Nope. I should be though.  I'm keeping the buggers in business while everybody goes back to basics.

PS: This recipe is not suitable for meat free Mondays.

PPS: If you don't want your child to grow up on cereal - you should buy Cook Once, Feed All.  The genius that wrote it is funnier than me, takes great pics, actually can cook and all the people that actually use it - swear by it.  #notsponsored #genuinereviewersloveit #shegenuinelylovescooking #andherchildren #Ijustlovethisgirlsoyoushouldbuyherbookandmakeherfamous