An open letter to Russell Brand

I am a fan.  Particularly of your vocabulary.  And I envy your ability to articulate ideas and concepts using words that flesh out the meaning of each sentence, so that you can literally roll the idea around in your mouth and taste it's flavour.

I love that you challenge ideas and constructs that seem immovable and inevitable.  I like that you own your own humanity while campaigning for wider acceptance of the human condition in all its chaos.  I'm pleased that you only have one outfit in the world apparently and yet you still remember to clean your teeth.

But Johnny Rotten is right.  The right to vote should not be ignored or done from a position of ignorance.  Now, more than ever, every single individual has access to information, ideologies and discussions that can help us form our own opinions and view points.

If you take your rights for granted, they become eroded and lose meaning.  They will be taken away and you won't even know you have lost them.  If you take no active part in the governing of your country, the policies of the country you call home, or use the channels available to you to protest what is ignored or mishandled - then you are culpable. 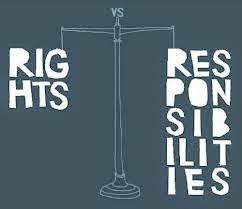 Revolution is not just the shouting and looting and metaphorical beheading of those that represent the system.  Revolution has to be a commitment to reform, to active citizenship, to responsibility.  It means voting and working and taxes and allowing people to be complete numpties.  But not voting them in hopefully.

Revolution is about recognising that our best interests are not served by decimation of the environment, cuts to welfare for the elderly, a lack of investment in education or a flouting of our obligations to people's human rights.  Revolution is actually about citizen power.  Revolution is about our citizens demanding that our governments speak on our behalf and not on the behalf of corporations that already make profit that would wipe out debt in third world countries.

Revolution is not no ties and more cake for all.  Revolution is the righteous actions of people that have allowed themselves to be the fall guy for bad decisions.  "We have a public mandate" generally means "nobody gives a shit so we'll do what we want."  There are over seven billion people in the world.  We need a system.

Voting. Taxes. Jobs.  All those boring things are essential for the revolution because even the first world economies with their 'rights' have had them less than a century.  Less than half a century depending on gender and skin tone.  Still haven't got them depending on sexuality.  Too many of the third world countries have never ever had 'rights'.  Yet like those that have never experienced a world without vaccinations and so don't vaccinate because they're idiots, we discard our responsibilities and obligations as citizens when we don't vote and/or claim "they are all the same".

If "they" are all the same - "we" did it. Apathy, the discarding of our responsibilities because there are other people that can do it, causes decay.  Governments don't go from awesome to crapola overnight - it's an insidious decline made possible by the people that vote them in and then don't challenge them, don't use their hard won rights, to be proactive in the formation of their own future.  "They" are the problem.

Revolution comes with responsibility Mr Brand.  Perhaps add that to the soundbites being frantically retweeted by those that who don't yet know what they don't know.  You have no rights if you don't use the ones that have been hard fought and won for you by those long dead.

Agreed?  PS: Who is paying for the cake?