If you're living life in the mainstream, there are support groups for pretty much anything.  Like anything.

But try and live slightly outside the box and you're screwed! You're doing it on your own.

Where is the support group for Lesbian Step-Mums in semi-rural Western Sydney? Not a one that I can find?

What about the group for people that don't play golf but want to get a promotion in a big multi-national?  Nothing. It's play golf or quit!

What about stay at home dads with a passion for lip-synching 80s music? Nothing.  It's lonely out there. 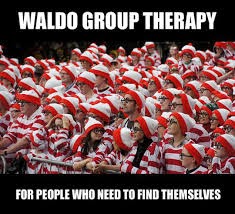 And don't scoff.  There are mainstream organisations that are heading towards support group status. Attendance at church is dropping.  You might be going to mass weekly at the moment but it's a short trip from there to meeting in former churches as a founding member of The People Who Still Believe In God Group.

Members of Hillsong will join The Former X-Factor Voters Group and with all the Football players swapping codes we will shortly be in need of a People Who Don't Know Which Code They Follow Group.  There will be support available for People Who Thought Climate Change Was A Joke in a group and a huge influx of membership for People Who Read Miranda Devine's Columns On Purpose And Feel Dirty Groups right across the nation.

And what about a group for People Who Have Listened To Trance While Not High And Are Now In Mourning? People That Took Kale Too Seriously? People That Just Don't Know What To With Themselves?  There are niche groups for everything.

I personally need a support group for People Who Learned To Touch Type On A Typewriter Back In The 80s And Are Now Finding It Hard To Let Go Of Two Spaces After A Full Stop.  I tell you - it's killing me finding out that I'm showing my age because I learnt to type back when sentences had a structure.  I KNOW RIGHT?  Feel for me.

It's nice to find your community - a little group of people that understand you and your experience - no matter how unfamiliar it may be to some.  Tribe matters.  No matter how awesome our touch typing speed is or how we came to be parenting small people.

So if you do know of a nice group of Lesbian Step-Mums - do let me know.  I know a lovely Lesbian Step-Mum who started this particular musing by yelling down the phone to me "AM I ASKING TOO MUCH WHEN I SAY I JUST WANT A SUPPORT GROUP FOR LESBIAN STEP-MUMS? AM I?

No my dear girl. You're not.  Got your back here.