Did you get a picture she asks cheekily?

It was a home invasion my friend, not a fucking date.

It sounds bad and my friends it was worse.  I work from home and here I was sitting at my computer tippetty tappettying on my keyboard because I'm good like that, when I have to duck as a bird flew over my head and smack back into the window.

Having shat down the window there, it shot off entirely by chance into the bathroom where it flailed against the fly screen desperate to get out.  Unable to get out, bouncing of screen and windows and mirrors and walls, it shat all over the room and then bounced down the walls to the main bedroom where it flew at full force into the window and temporarily stunned itself.

Shitting itself as it went down.

I race into the bathroom where gagging on the putrid stench of the results of vegetarian and worm diet I managed to wrestle the screen off the bathroom window, practically dislocating my wrist in the process, and desperately hoping the bird didn't return for another go before I had a chance to move out of its way.

Because I can tell you people that birds shitting on you is not lucky.  It's bullshit made up to make you feel better about being the only unlucky bastard in a 100 kilometre radius to have a bird choose you to take a dump on.

Some days the saying goes, you are the pigeon and the others, the statue.

I sidle down the corridor to see what the bird is doing. It's grown in size by this stage and is roughly the size and weight of an elephant but yet somehow still seems to manage to be lurking under our bed strutting the strut of the truly desperate. 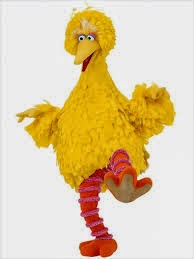 It lurches up again, flies straight at me and then boomerangs straight back into the window.

I brace myself for an attack and jump onto my bed and launch myself onto the window sill where, balanced between bed and oblivion, I tear the screen out of the window frame caring not at all how I will reassemble it later, all before the bird rolls back on to its feet, shits and goes back under the bed.

I back over the bed, straight out to the door where I resolve to ignore the problem before it goes away.  I've dismantled the house, dislocated limbs and I don't want to play anymore.  Occasionally the little bugger wanders up the corridor to have a look but keeps returning to the safety zone underneath my bed.

All goes quiet for a while and I assume I've won and that it flew out the open window without me noticing and so I email Nick to say the bird has gone. Just as I hit send, it launches up from under the bed up onto the air conditioning unit, onto the clothes horse and in one fluid movement, heads out the open, now screen less window, where it flies across the yard, perches on the frangi pangi tree and shouts abuse at me.

Which is fair because I have flung profanities at him as if he was Morrison himself.

I close the window of the bedroom, survey the floor and bed and curse Mother Nature and all her stupid birds.  Donning hazmat levels of rubber gloves I go and throw out anything in the bathroom the bird shat on, spray bleach around with absolutely no regard for the environment and scrub down the bath, floor, windows and walls.

Then on my hands and knees I work my way up the corridor, scrubbing the carpet furiously and repeatedly.  The bed is stripped and moved, a couple of missing toys located, carpet poured with the kind of liberal abandon I normally reserve for my wine and now I am sitting at my computer listening to a genius playlist based on the song "Birdhouse in my soul".

This kind of shit NEVER happened when I worked for the man. Never.

Now, where was I?