Mama. What is God?

A brilliant question my darling girl.

And one I palmed off beautifully by telling her to ask her Dad because HEY LOOK AT THAT A YELLOW CAR.

I watched the ABC's The #Agony of God a few weeks ago and was quite cheered in parts and a bit glum in others. Some people are very good at letting people believe what they want to believe and others are just arsehats.

We don't all have to believe the same thing.  But we don't have to be condescending numpties if we believe that our position is 'more right' than the other. 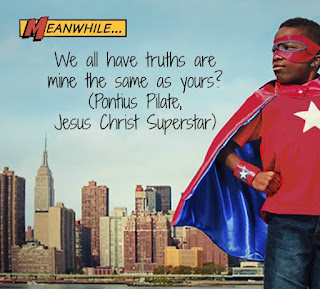 God is a tricky one for me and one I have spent, and will continue to spend a lot of time thinking about on and off I suspect, particularly in the context of the person I am and the people we want our daughters to be.

I was brought up as a Catholic. My other half was brought up a Methodist.  Both sets of parents are firmly in the 'persons of faith' category.  Our extended family are a robust mix of priests and Peppa Pig fanatics, with the odd Pastafarian. Or maybe he's a Buddhist.  Nice chap either way.

And yes, Science is tops.  I understand and value the burden of proof. I get that science is generally right.  Even when it changes and takes away Pluto's rightful position as a planet in the solar system.  I don't need to understand the Hadron Collider to get that people are really excited about particle acceleration and passionately committed to understanding it better.

I don't need to understand everything to value it.

And that's okay - 99.9% of people can't explain how the internet works.  But it does. And my lack of understanding doesn't mean I can't get great benefit out of it. There are things written on the internet which I can interpret in one of two ways and I am never going to choose the one which makes 'stop the boats' anything but xenophobic bullshit political spin. But you might see it differently. We're probably reading the same thing.

No matter where we seek our truths there are always going to be things that are more than what we comprehend. I see those with a quiet but fierce faith and am quietly envious of their sense of surety. But yet, conversely and completely judgementally, I find that people who fiercely and quietly believe that waving crystals to the left of their ear will heal their vaginal thrush are on the 'batshit crazy' spectrum.

We are cheerfully, comfortably in Camp Agnostic these days.  Which is like Band Camp - no matter how much you enjoy going there, it's not very trendy.  These days you need to believe in one or the other.  There can be no grey.  NO GREY AT ALL.

It's like #TeamAniston and #TeamJolie all over again except you have to be #TeamReligion or #TeamScience. You can't say you like both.  You're not allowed to sit on the fence getting the view of both sides. It's NOT ALLOWED.

Basically, when it comes down to it at the moment - people using 'absolutes' on either topic generally fail the #dontbeadick test.

I am not anti-faith. Or anti-science. I just don't know enough to want to put all my money on the one outcome.  I don't know a lot, and this is something kind of big that I don't know. What I do know is that I am deeply cynical about, and very disillusioned with, evangelism and extremism of all kinds.

We have many friends with faith. And many friends with science.  And many more with both. And they are all wonderfully, complex and beautiful people.  Gorgeous every single one of them. And I can't help but feel that's the glory of Camp Agnostic - we can like everybody.  All of the time. And we don't even have to feel peskily superior either or sorry for people that think differently.  Because we're kind of comfortable with the fact that everybody does think differently and that ultimately, none of us are going to be certain we chose the right team until we're dead.

Most importantly to me - this not knowing that we so freely profess to now, is that it gives the girls the gift of choice when it comes to deciding what to believe in.  They can (hopefully) build up empathy, compassion and an abiding curiosity for the world based on their own experiences and interpretations. And perhaps even learn to trust themselves with a confidence that expresses itself through kindness and not extremism.

Or sure, we're screwing it up for them entirely and they'll grow up searching for a life more meaningful than the view they can see from the fence we're perched on.

And if that means we have to stock up on colanders*, well then. That'll learn us.