Humanity with profanity (and giveaway)

Over the weekend I attended ProBlogger conference which is (drum roll) a conference about blogging.

Somebody said that getting 700 plus bloggers in one place to talk about something they're fanatical about made us sound a bit like Hillsong but I can assure you that there was way too much wine without water, no Justin Bieber and way too many times the word 'vagina' was mentioned for that comparison to have any validity.

I was a little bit (read: hugely) chuffed when somebody described my blog to another blogger as "kind of social good and people focussed, pretty funny, a bit ranty and with a touch of swearing".

Humanity with profanity. Who knew I had a niche???

That said, it's no secret that I feel all the feels and generally feel quite strongly about them as well. And I'm okay with that. Mostly. Except when I'm not.  And then I generally blog about that too.

Somebody asked me what drove me to blog in the first place and it was simply being stuck at home with two small people who were unable to engage in any meaningful discussion about why Tony Abbott was such an arsehat or why tuna has to feature so prominently in lunch recipes.  I can't say it was a calling as such but I am happy to repurpose that should I ever write a memoir.

And to be fair to me - those two small people are still disinclined to participate in solid discussions like that but can name every single Disney princess known to mankind, 7894 reasons not to eat vegetables and most of the planets.  We basically don't have a thing in common apart from the odd gene or two.

So I blog on. Or carry on. Take your pick.

If I was asked to identify what drives a lot of my posts - it's my aversion to apathy. This is of course beautifully summed up by The Lorax.

The rest of the time I just blog for the conversation.  I'm an innately social person who works for herself.  I like the connection. I'm not on a journey. I have no fashion sense. Can't cook. Won't craft. Think that if you're kind to your children you're probably doing okay. Only run for money. Reflexively sarcastic and with a very black sense of humour.

But I like people. I genuinely do. Even the ones in velour. Unless you're a dick. Then I'm less inclined to like you but I TRY not to be a dick back.  Not always successfully. Because, you know, human.

So there is my one thing. My contagious message. 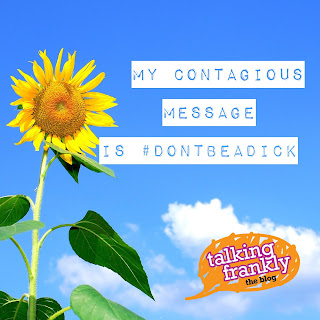 On another note - I am an active supporter of a couple of organisations that are incredibly dedicated to the #dontbeadick philosophy - one of which is, as you know, World Vision Australia.  World Vision are bringing the awesomely talented voice play skills of Naturally 7 to Australia in the next few weeks.

Naturally 7 have supported Michael Buble world tours, duetted with him, played with Coldplay, Ludacris, Mick Hucknall and so on and so forth.  You can check them out-voicing The Voice here and all you have to do to win one of ten pairs of tickets is to comment below or on my Facebook page telling me the name of somebody you think is ace and the show to which you would like tickets if you won! (Comp closes at 6pm on 28 August 2015 AEST) 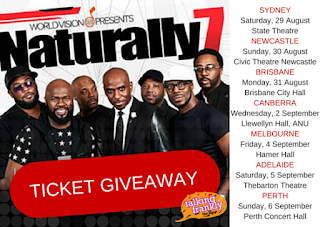 What about you? What is your contagious message when it comes to life? Got one? Wanna borrow mine?