I met a beekeeper 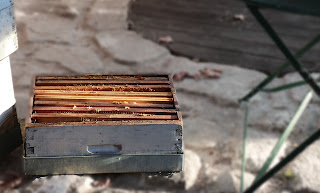 An apiarist if you would like to use the correct term.

They have a farm up near Emerald. They sell their honey to Capilano which is great because that's my favourite honey and it's always nice to contribute to a conversation with a stranger with something positive even if completely pointless.

She was one of fourteen children, had nine of her own over a quarter of century. The youngest is now a quarter of a century old. They live all over but not far from home.

Except for one daughter. One daughter she hadn't seen in almost ten years. Married to a lovely fellow, two gorgeous kids, works for a televison company. Very clever she is.  About to turn 40.

In fact, she was flying in as a surprise to celebrate the 40th. Her son-in-law and some of her other daughters had planned it.

This was her first time flying.  She was in her 70s and she'd never been on a plane in her life until yesterday.

She was in parts terrified, excited and overwhelmed.

But most of all so touchingly thrilled to be seeing her daughter.

We chatted on the plane, through the airport and out to where she was meeting her son-in-law. She'd never seen so many people or so much commotion in one place in her life.

When she saw the son-in-law he gave her a big hug, then she gave me a big hug to say thank you and got in his car and away they drove.

I cried. I was so ridiculously happy for her.

I don't even know her name. But I will be thinking of her for a long time.

I hadn't seen my babies for 36 hours and I had missed them so much. To let your children fly free and live their own lives, even if it means you don't see them for 87, 600 hours... well that's a whole lot of love.

A whole lot of love indeed.