I've been musing lately about the strange beast that is friendship.

Don't ask - I'm in therapy. I muse on a lot of things if the truth be known. 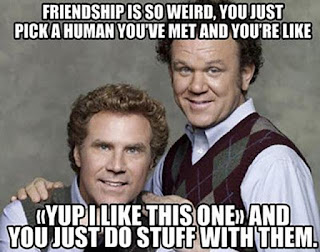 Some people have friends they've known all their lives. Literally. Admittedly most of the people that I know who fall into this category are currently only six years old, but you meet people whose parents met in the labour ward and their friendship is going strong 30, 50, 80 years later.

On the surface, friendship makes more sense than family. Family is compulsory. Friends are optional. It makes sense to spend some time choosing the people you really like and making the effort to keep in touch with them.

But then, the old adage, friends are in your life for a reason, season or a lifetime is true too. I look back at my late teens, early twenties and some of the friendships I considered more vital than air have passed into nodding acquaintance or Facebook only contact.  It's not that I don't like them, it's just that life has moved on and we moved with it. The world is very black and white when you're younger. It's only when you become a walking cliche and put some years under your belt that the world is way more than fifty shades of grey.

But then there are the friends you have nothing in common with at all. The ones that have got your back so fiercely from day dot. That love you with the kind of abandon that comes from knowing everything there is to know about you and still thinking you're wonderful.  You could never explain why you are friends, it just clicked into place and boom.

There are the friends that hold a special part of your heart no matter how long you go without speaking. These are the ones that when you pick up the phone after six minutes, six months or six years, start chatting to you as if they only just left the room.

There are the friends that you share a unique experience with - a tragedy, a trip or a celebration, and just like that. You're friends. You endeavour to catch up when you can, but keep in touch when you can. What you've shared with them is unique and so is the bond.

The friends that you have known so long that even though you know logically that now you would never have a reason to connect, they are so vital to the person you were, or the person you became, that to lose them would be to lose a limb. Or your mind.

There are good friends. There are bad friends. All of us are imperfect friends.

Strange as it sounds, I like all my friends. Even the ones in England that said they would come and visit and haven't.  Even the ones that voted Liberal or admire Trump or think that Crocs are acceptable fashion wear. I have friends with thermomixes. Some that do cross-fit. Some that like maths. Some that don't understand the appeal of Colin Firth. I have friends that enjoy fishing. Or spending the equivalent of a mortgage on visiting fancy pants restaurants. I get it. We're all different.

I don't need people to believe all the things I do.

I just try and make sure my friends are not arsehats.

It's not an exact science, sometimes I get it very wrong. But mostly my friends are only arsehats occasionally. And I think these days my own personal acts of arsehatery are occasional rather than torrential. Occasional Arsehatery is a very human condition in my mind.

Like most people I have friends from all over the place. Some are family. Some I have met at school or studying, in Venturers, at Rovers, travelling, at antenatal classes, at one of the companies I've worked for, at bus-stops, through business, at conferences, online, rollerskating, via boyfriends, via friends, via Dad!, outside libraries, volunteering, living with them, hobbies, in queues, at parties, at weddings, and so on. In fact, some of the friends I love the best in the world I had no interest in meeting at all.

Friendships are born of connection. However random.

I don't think you can ever have 'too many' friends. If you like people, why not have them in your life in one capacity or other? Every friend I make teaches me something I didn't know. Whether it is about life, or them, or myself, it always adds value. And I like having people that think differently around me.  I like the ones that think like me too. Which is actually strange considering how incredibly odd my thoughts are most of the time.

I mix my friendship circles - sometimes well, sometimes not well. If I like you, I just assume everybody will. In the interests of full disclosure - this is not always true. It is however ALWAYS awkward.

Friendship is weird. It's probably what makes it so damn appealing.

But it's still weird.