There are very few 'professional' opportunities for a blog written by a pottymouth female who has no 'niche', so the fact that two have recently come into my inbox makes me feel a bit like a kid on Christmas morning.

The first was an invitation from iFLY Indoor Skydiving Sydney West to come and check out their new Superhero Training School which is launching these school holidays.  I immediately said yes to five gifted tickets without checking the small print.

In case you are wondering, the small print will tell you that a thrice fractured S3 vertebrae rules you out of flying until it heals properly. This broken butt business is starting to get old I have to say!

Nobody makes it through life without wishing they could fly at least once.  As adults we chase it by bungy jumping, parasailing or via tandem skydives. I did a bungy jump in New Zealand some years ago over Lake Taupo. The feeling of tipping off the platform to plummet towards the water below is one of such exquisite terror that you understand why people become addicted to it. There is a poetry to the freefall that is not reflected by the words captured in the recording of my fall when I ask if it's okay to wet myself.  The answer is yes it is, but I didn't. It's a life highlight to be honest.

Thing is, bungee jumps, skydives, parasailing - they are things you do once because, well, because money.  But kids don't think of life in terms of money. It's the best thing about being a kid really, not having to think about money.

And if you don't think flying like your favourite Superhero is an experience, you are dead inside. 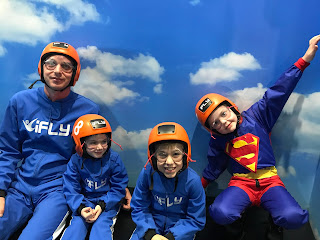 Mind you, when you head to one of the iFLY venues to try it for yourself these holidays (on the basis of this blog so that lots more people realise the value of giving cool shit to pottymouth bloggers - please and thank you) make sure you are totally ready to answer questions about how people fly, how planes fly, why Superheroes wear capes if they aren't actually needed for flight, why birds flap wings and people don't flap arms, and also have some kind of theory about why they won't get travel sick flying when they do get travel sick sometimes on car trips.

FOCUS CHILDREN! WE ARE GOING TO FLY!

Anybody who reads my rants regularly knows that I am absolutely besotted with my children.  I got lucky basically - I grew really awesome humans. And my heart basically burst out of my chest when I saw them all kitted up in their 'air suits' ready to fly.  They'd done their training and knew what all the hand signals were and they looked like a cross between Superwoman and tiny Top Guns.

The cute! It burned! 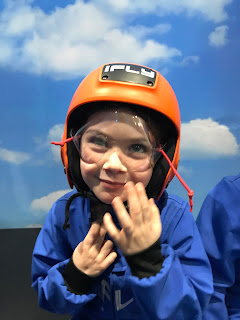 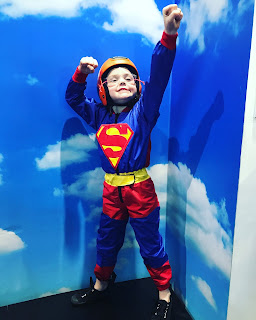 And to see them fly! Their small faces screwed up in concentration (and also because they hadn't realised how blowy it was inside the flying tunnel) and their bodies curved into the right shapes to stay afloat. 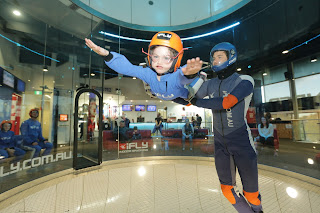 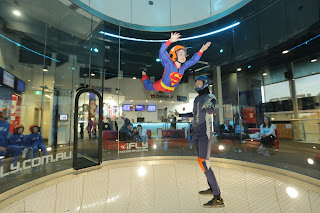 All the feels on the faces of the the ones that chose to 'go up' (which is when Jimmy - the instructor - takes hold of them and flys them up to the top of the tunnel and back down again. TWICE!).


It was also beyond adorable when my smallest one was momentarily terrified, when she thought he was going to let her go (he wasn't).  Bet it's the first "tandem skydive" he's ever done with a small person on his head! 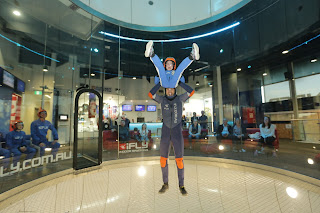 When they had finished and were basically on the kind of high adrenalin brings - bouncing around the venue almost achieving more height than they had during the flight - I tried to get them to describe how they felt about it.  Mr 7 wanted to go straight back in NOW, Tully (aged 6) wants to come again because she felt like a 'real life Superwoman' and Cassidy (aged 5) thought it was great but she DOES NOT WANT TO GO AGAIN!

"I liked it Mama, but I think I prefer being in a plane to being out of one!"

And it's fair to say that should Mr 35 follow through on his current plans to become a skydiving champion, he'll have no reason to oppose me getting another motorbike.

While the kids loved flying, they were also fascinated by the training, the outfits, and they adored watching the iFLY teams demonstrating the advanced flying techniques such as spinning and going upside down and flying in formation.  They spent ages with their faces pressed to the glass (sorry whoever had to clean that glass) watching in fascination and opining on how it might work. I'm fairly confident on the basis of those discussions that none of them are heading for a career in aviation but who knows....

There was a downside to having spent a few hours living the Superhero dream - leaving the venue we had to impose some rules banning freestyle parkour and have some quick conversations about gravity and why you can't fly without training. Especially from walls, park benches and the like.

We'll be back fo' schiz - probably after my broken vertebrae heals and we've had a chance for Cassidy to forget the moment she sat on Jimmy's head.  Sorry again Jimmy.


For those interested in giving their kids the full Superhero experience and join me as "Mama of the Year", there are three current locations for iFly Indoor Skydiving - Sydney West, Gold Coast and Perth. Opening over the next year there will be another Sydney venue and a Melbourne venue. The Superhero training classes are free (sans fly) and only $39 with a 'fly'.  For more details go to www.ifly.com.au.