Aristotle, Google and Me

It was Aristotle that said "Give me a child until he is seven and I will show you the man" and he also said lots of other fairly clever things which is why people still talk about him 2,500 years or so later.

Now, like most things that were written 2,000 or so years ago, it's fair to say that it wasn't meant to be taken literally.  And I think we can all agree that he was talking generally about the first seven years of life being critical in terms of the development of a child in relation to the adult they would become.

Or maybe he was offering to raise the entire Greek population for the first seven years of their lives and his great plan to found the greatest childcare centre of all time was wildly misinterpreted. Bummer that - 2,500 years of childcare fees would have easily made him richer than... well anybody.

But I digress.  Modern thinking about raising children would indicate that he was correct about the early years of a person's life being hugely influential.  But I think we also dismiss the human experience to say that who you are at seven is who you are for the rest of your life.  And since most of us don't remember much until we are about four it would be disappointing to know that the adult you become is entirely shaped by the poo, fart and bum jokes you spend the following 900 odd days telling.

That said - it would explain a lot about humankind.

Our eldest daughter Tully turned seven a few days ago. She's a great kid.  Clever, inquisitive, stubborn, loving and kind. She worries a lot for a small person and she is fierce with her affections. She's very loyal and sometimes, like all humans, she's a massive pain in the derriere.  She's completely adorkable to me and her father, and the centre of her sister's universe. 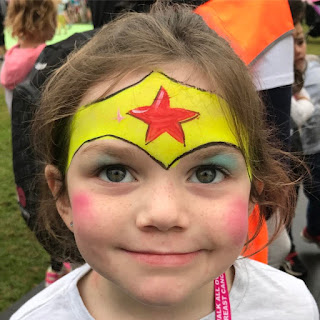 That will mean being proactive about getting out in the world, going outside her comfort zone, being open to education and different kinds of people. It will mean knowing that the world is shades of grey and not the black and white we see it as when we are younger. It's about knowing the difference between right and righteous, between kind and nice, and of course - between their, they're and there.

I have lived six sets of seven years so far and I can comprehensively say that the person I am now is a much more rounded version than me at 7, 14, 21, 28 and 35.  And what I have learned about myself in the last seven years has been heavily influenced, firstly by her arrival and then her sister's arrival which just goes to show you that it's not just people older than you can teach you things about yourself.

I would like to think that my seven year old realises how much power she has in her own life much sooner than I did. I want her to know that no matter what we've imprinted on her in the first seven years, she is the only person that steers her boat. She doesn't need to be the person I want her to be, or her father wants her to be, she needs only to be the person she wants to be.

And at seven, she doesn't really know what that is unless she looks at it in the context of a career. In which case she wants to be a doctor/rock star/actor/scientist/ethics teacher/spy. But being seven years old is far too young to realise that what you are is never going to be as important as who you are.

I know right? Who needs Aristotle when they've got me. And Google. How did parents answer the questions of seven year olds without Google?

One for each year

I got asked last week why I feel so passionately about marriage equality when I'm not gay.

I'd like to say first of all that I don't think wanting all the humans in the world to have the same human rights as other human rights is the weird thing.

I think the weird thing is that not everybody cares about equality.... not just marriage equality.  Why aren't we all passionate about a world that is free of hate and bigotry of all kinds. Why does one human think they are better or more worthy than another human being EVER?

I mean we can think we're funnier, or more interesting, or cleverer, or even better looking - but to think we are more human than another human on the basis of skin colour, religion, sexuality or anything at all really is just daft.

And I think people know that.  They do. But we can convince ourselves of almost anything in an effort to belong and some people choose hate as their act of belonging.  That's the whole thing about free choice.

But sexuality isn't a choice.  It's the same as skin colour. Fuck all to do with you and all to do with biology.  That' doesn't mean sometimes you don't wish it was different - I'd love to have skin the colour of Lupita Nyong'o - but I was cursed with the kind of pinky white skin that burns in the sun and makes you look weird and blotchy for a month after you cry.

I think the only reason people would wish their sexuality was different though is because as a society we have spent a lot of time being homo/queer-hateful and that kind of negativity can be hard to ignore.

And some people argue that marriage equality is not THE issue of the day. That it doesn't affect everybody.  But it does. When inequality is enshrined in law against any of our fellow humans, we're essentially condoning inequality as a reasonable option. And history shows that ignoring inequality and hate allows it to flourish. It's a well documented way to hell.

But we're on the cusp of setting the world to rights by ensuring all Australians have the same human rights as each other. Sure, I get that we can go to war with North Korea without voting for it but deleting a sentence in our legislation requires 122 million dollars worth of paperwork - but hey, mine is not to point out the hypocrisy again of the LNP.  They're doing a mighty fine job of it themselves.

But I am 42 years old.  And I have at least 42 reasons of my own, one for each year I've been alive, for wanting marriage equality.  They have names, partners, children, homes. I have worked with them, travelled with them, drank wine with them, cried with them, laughed with them, celebrated with them. They are my friends, my confidants, my tribe. They are better humans than me on the whole, and mostly better looking and kinder. None of them are funnier obviously but then who is?

So in short, I have at least 42 reasons for being passionate about marriage equality.

Even though I'm not gay.

This time next year

I had to have a really difficult conversation with my daughters aged five and six this week.

And I blame Brad Purdy and Karl Stefanovic.

We were watching our recording of 'This Time Next Year' on Tuesday afternoon and Karl encouraged Brad to say it out loud..... so he did.

Says the six year old who is about four years late to the "WHY" stage.... "Why did he have to say it out loud?"

So I explained that he has never told anybody before that he is gay.

"Well he was worried that his family and friends might not love him if they knew."

"Well some people don't think that loving people of the same gender is okay."

The five year old now adds her "But why?" in that tone that tells an adult that they are making no sense at all and you are definitely not getting your point across.

This is where it got tricky - how do you summarise the complex issues of bigotry, politics, religion and the importance of equality into a few sentences that explains everything in a way that is suitable and digestible for two small people. So I said 'Um' and paused for a moment.

And the six year old interjects with "So Brad hasn't told anybody that he wants to find a husband because he is worried his Mum and Dad might be mad at him?"

"But it's just love, why would his Mum and Dad care who he loved? Isn't love good?"

"I don't get it. If you love somebody, you just tell them. You can love anyone you want. It's nobody elses business right?"

And in that moment I could have hugged them so hard they popped. I would have liked to have sat them down in front of every opponent of marriage equality and said to them THIS. THIS IS WHAT LOVE IS.

It's just something you tell people. It's nobody else's business. It's definitely not something that needs to be voted on.  Kids get it. It's only adults that make it more complicated than it needs to be.

But because I'm a responsible parent I just said "No it's nobody else's business my darlings, you're quite right.  It's just that some people are....."

But just for the record I was going to say "odd about things sometimes."