It's the little things

If you're a parent, you'll remember in the period of time between when you found out you were expecting and the birth of your child/ren that you read up on every single milestone possible. In that first year, you obsessed over every single one of them, sure that their ability to roll over or sit up at the right time OR AHEAD OF TIME, would guarantee them entry into Mensa later on in life.

A friend of mine recently referred to me as 'laissez-faire' parent, which I thought was an insult until I revisited the definition and saw that it meant 'the policy of leaving things to take their own course, without interfering' - which actually describes my default parenting style almost perfectly.  That said - not in the beginning - I was as obsessed with the milestones as if I was the most attentive of helicopter parents.

But this summer, I realised that a whole bunch of milestones have passed recently that went by without fanfare. These are the milestones which demonstrate my daughters' growing independence and I realised that they were just as worthy of noting as first steps and visiting the supermarket without needing to go down the baby aisle.

It's the closing of doors when they go to the toilet or get changed. It's them running their own bath and shower and getting themselves into pyjamas. It's them getting their own breakfasts. It's them waking up and going downstairs and entertaining themselves leaving their parents to sleep in. It's the playing for hours without paying you any attention (until you make a work phone call and then they have a thousand things which need addressing IMMEDIATELY)

It's the reading of books to themselves curled up in beanbags. It's the creating their own Spotify playlists and letting you know that they don't sing the swear words in songs they love.  It's the self censoring around 'inappropriate television and ads'. It's the attention to grooming. It's in the spontaneous hugs and kisses that almost permanently injure you but asking you not to kiss them at school. It's the long legs stretching below skirts which were floor length five minutes ago.

It's never being able to get a photo anymore with both of them looking normal. 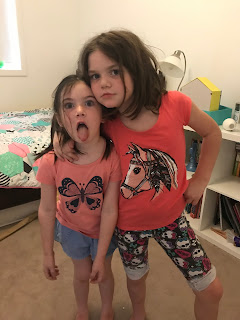 It's the conversations you have about world events. It's in the absence of ABC Kids TV and the proliferation of You-Tube inspired cackles. It's when you find them watching You-Tube videos as they teach themselves Japanese. It's the closed doors when they are mad at you. It's being able to leave them alone when you pop to the corner store. It's in the friends that they choose. It's in the quality of the jokes they tell - even though they still find mentions of poop absolutely hilarious.

We got lucky with our girls - they're awesome. But every cliche about how fast your children grow is true. I chuckle when I think about how much time and energy I invested in worrying about the first year. That's the easy bit in some ways because while you might be sleep deprived, and slightly manic about germs, you still think you've got a say in who your children become.  You're more in control in that first year that you will ever be again.

But I'm loving these milestones as much as I loved the ones in the books. I'm loving how two girls can be so similar and yet so different.  I'm loving that we get to hang out with these two extraordinary humans.

And Yes - please remind me of this when we hit puberty.