A friend asked me recently what I thought of THIS article. Now I want you to be very clear that she only asked me because I am an EXCELLENT parent and never make mistakes.  I am such an excellent parent that my kids don't drink juice because that shit has sugar in it and SUGAR IS BAD.  I am basically perfect.

Fine. They don't drink juice because they don't like it. WHATEVER. So picky aren't you?

Anyway, my friend asked, "Wondering about your perspective on this 'mum moment'. Do you tell them they let the other side win or do you tell your kids that the better team won on the day. I’m for the latter but have been known to encourage my child (if the situation required it) to encourage rather than compete - mostly to avoid conflict. Thoughts?"

I think we should start by clarifying that the chances of me ever taking my children to watch a sporting game of any kind is VERY unlikely. Mainly because watching sports is dead boring - even if your dad happens to be a really good player. I mean my husband is splendid at his job too but I wouldn't be interested in watching him do it either. Let alone inflict such madness on my children.

I think Giselle nailed it on this occasion. Even if the woman that wrote it mocked her English speaking skills for some reason I can't work out.  Sometimes you win, sometimes you lose. And congratulating the other side for winning should be the thing they teach every kid that plays sports.  If they can't do it - they don't have what it takes to be on a team.

Because life is fecking unfair sometimes. I mean Steven Bradbury wasn't meant to win the Short Speed Track in 2002. But everybody else crashed and he sailed into the history books as the first Australian to win a Winter Olympic Gold Medal.  Sucks to be the other guys sure, but he still won and he's still probably the only Winter Olympian I could name - even under torture. 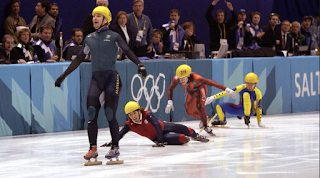 Don't get me wrong, I get why the kids were heartbroken that Daddy didn't win. The great thing about small people is that they think the sun shines out of your butt. They think you are the best at everything all of the time.  That's why you have kids - they give you the only years of your life where you are revered as a god.

It's like when my youngest gets a blind Lego bag and ends up with Superman's Dad. Sure she's disappointed. VERY disappointed. She immediately wants what her sister has, but the same rules apply as to Bradbury's competitors or Tom Brady.. sucks to be you today. It doesn't matter how much you want something, no matter how often the odds go your way, sometimes they don't and you just have to hope the outcome is different next time.

In the meantime, you have to be happy for your sister that got Harley Quinn even though you got Superman's Dad. I get that it's disappointing for you, but it's not all about you. Which is totally unfair I get it, but that's life. And life can be a complete arse no matter how well you play it.

I'm not a fan of disappointment.  I don't know anybody that is. But if you let your disappointment take away from the joy of somebody else, than you're a dick.

Basically, I'm with the supermodel on this one - it is never ever ever too early to teach your kids, that no matter what goes down in life, don't be a dick.