Not everyone is a prick

I'd like to start with the good news.  The world is more full of Yassmin Abdel-Magieds, Behrouz Boochanis and Magda Szubanskis than it is the spineless jerks that troll them.

It's just that sometimes hate is spewed at us in so many different ways, from the mouths of our politicians, from gutless national policies, from institutionalised misogyny, from defensive religious institutions, from the back seat of an Uber, from the headline of a newspaper, from lazy TV commentators, from professional xenophobes with newspaper columns, from the social feeds of angry, anonymous men whose privilege is being threatened by progress. 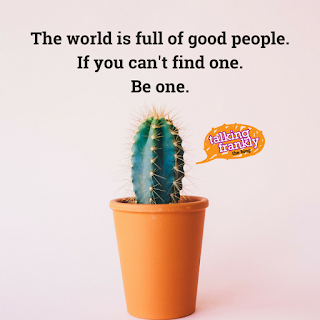 We think that the world is getting more unsafe, when the opposite is true. We think that nothing is changing, but yet so much is.

And it's happening at a molecular level. It's happening when people stop using racist language to describe their taxi driver, it's when seven year olds know about Malala, it's when 10 year olds are appalled by notions of slavery, it's when 15 year olds can't imagine a world where a woman had to resign from her job if she got married, it is when 80 year olds are marching in pride rallies to support their grand children, it's when schools are actively celebrating harmony days and children can't imagine a world where you grew up knowing only how to say 'hello' in your own language because classrooms were not a place of diversity.

It's happening globally too. World Vision over the last 5 years have seen over 90% of the children they treat for malnourishment make a full recovery and are reaching one person every ten seconds with clean water.  Men in India are actively taking a stand against child marriage that has tarnished the future of young girls for centuries. The amount of people living in extreme poverty (under $1.90 a day) has dropped by over one billion. The number of children dying due to poverty over the last twenty years has dropped from over 30,000 per day to under 16,000.

At the same time as first worlders are banging on about how detrimental innovation and technology are to the lives of themselves and their families, families in developing countries are benefitting from pilot programs like Last Mile Mobile Solution (LMMS). Started by World Vision and used by them and a bunch of other organisations now, it ensures that in times of crisis or at 'The 'last mile' (the critical stage of humanitarian aid delivery) that essential supplies reach the people most affected by disasters. Aid recipients are accurately tracked. Rations and supplies are calculated and distributed with precision. That's something like 4.5 million beneficiaries in over 29 countries supported by a dozen different humanitarian agencies.

All the small acts of kindness, the monthly donations, the time given to causes and projects, the letters written, the petitions signed, the marches marched, the sharing of information, the miles walked or jogged to raise funds, the sausages sizzled, the fetes held, the volunteers volunteering.... all of it is making a change.

The world is full of Yassmins and Magdas and Behrouzs. But it's also full of Janes and Mohammeds and Simons and Wolfgangs and Svetlanas and Chucks and Brads and Kates and Imanis and Ashas and Richards and.... well, I think you get the picture.

The world is full of good people. Doing good things. Changing the world for the better. One little bit at the time.

Seek them out. Be one.