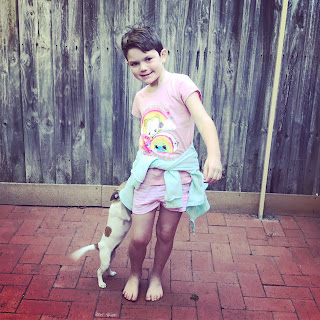 It wasn't something we suggested. She'd been thinking about it for a while before she asked to do it. She chose a style she'd seen on Emma Watson who is her all time favourite actress and feminist, who she has been reading about in 'Good night stories for Rebel Girls' and googling to find out more. It's a parenting win as far as we are concerned.

Plus it's just hair. Her hair. She wants it cut she can have it cut. She wants to grow it. She can grow it.

What has totally blown my mind is how cutting her hair made her stand out in the playground.

Little girls from other years were coming up to me in the playground asking why she'd cut her hair. And when I said she wanted to, they kept asking "but why? she is a girl". Parents were asking if she was sick or had cut it accidentally. Another girl said she loved it - but she would never do something that made her look different. A couple of girls in her class were snarky jerks about her looking like a boy, and while I was tempted to go all Samuel Jackson in Pulp Fiction on them, I said nothing.

And looking around the playground I saw that she was unusual.  There was no short, short hair cuts on girls to be seen on any of the other heads running about.  Here I was occasionally despairing that the uniform code didn't allow the girls to wear pants, but I hadn't realised that gender conformity was so strong in in so many more ways across the playground.

In fact, looking around the playground, the girls were a sea of 'same, same'. It is the boys and boys alone that were expressing their individuality in their haircuts. Long hair, short hair, fades, undercuts, buzz cuts, mini mohawks - you name it - it was there.  If you were male.

I do not think that in order to be a strong woman you need to deny your femininity by lopping off locks and burning bras.  But I do think that if we look around our playgrounds and see nothing but conformity in the 'look' of our female students and diversity in the male students we need to be having a good hard look at ourselves.

I completely accept that had my daughter not chosen to cut her hair, I would probably not have noticed. But now that I have, I'm going to be more mindful of celebrating other demonstrations of individuality when I see them in my daughters or their friends. I'm going to remember how if one small girl cutting her hair short can temporarily throw a playground into a spin, how hard it must be for children who follow their own paths in other ways every single day.

Those that have been following along at home for a while know that I think that the sun rises and sets in my children's bottoms. I love them with a fierceness I never knew possible. But I can tell that I am feeling so proud of my eldest daughter right now that I could pop.

Because she was aware that her haircut would not be loved by all. She told me on Friday after she got her haircut that she thought some people would make fun of her.  But she did it anyway. Because she wanted to do it. And she followed her own path in her own small way.

Is there anything more badass?