So. I had a brain haemorrhage

Or as the Germans call it - a schlagenfall.

I had it on the first Sunday of March. I woke up with a headache and a stiff shoulder and painkillers did nothing to relieve it. An hour later, I vomited violently in the downstairs bathroom and then was hit with a headache so severe I don't have the words to describe it.

It was like the hounds of hell were repeatedly striking me on the back of the head with an iron bar. Each wave of pain coming so closely on the back of the previous I couldn't catch my breath. In fact, I was trying not to breathe as that seemed to be the only thing that could possibly stop it. It was relentless. I lay on the bathroom floor wishing for oblivion.

I could hear my daughter crying and there was nothing, but nothing I could say to make it okay because at that stage I didn't know what 'it' was.

What's my pain level out of 10? Eleventy billion. Possibly higher.

Into the ambulance. Insert canula. Morphine.

They take blood. They ask questions. How's your blood pressure normally? (Fine - being a blood donor means I'm across these stats like a legend - my BP is generally perfect). Are you diabetic? (No) Do you smoke? (not since 1 February 2006). Do you take cocaine? (No). Have I ever? (No)

Are you sure about all of the above. Over and over again - yes. I offer up everything I can think of - I'm a booze hound (that's not a good thing and you shouldn't be but that hasn't caused this), my grandfather's great niece has Takayasu's Arteritis (nah, too far removed), I have had an unexplained abscess in my backside (hmmm... inflammation but no), depression (nope), I was feeling particularly upset the night before it happened (ah... nope).

All the surgeons are in agreement. I've definitely had a brain haemorrhage. But nobody knows why.

Smile for your visitors. Be polite to the nurses and doctors. Brave face for family and friends. Save the crying for my own time. Crying hurts my head. The facts are starting to filter through the fog.

Only around 10% of strokes are haemorrhagic - which roughly means caused by a bleed rather than a clot.

I ask for more painkillers. I might be alive but I still have a pool of blood sitting in the basal ganglia part of my brain waiting for the body to do it's thing and reabsorb the blood. In the meantime - it hurts.

Apologise to your husband for scaring the bejeezus out of him. Make bad jokes about how English people cope in a crisis. You say 'Pip Pip' and 'Lets queue' and you both cry together. You promise not to do anything daft ever again. He laughs because he's been married to you for almost ten years and he knows that's a promise you are not qualified to make.

They send me home. Rest and recuperation and we'll see you again when the bleed clears up. No driving. No flying. Cancel your work. Don't be worried about no answers. Be thankful you're not dead. This kind of thing kills people you know.

Yes. I got that. Thank you. My typical black humour has not abandoned me but this phrase is starting to make me stabby. 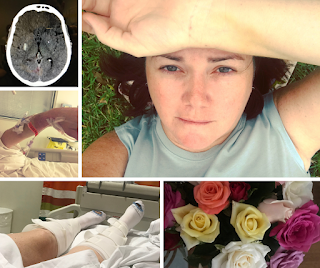 Currently my bleed is defined as 'cryptogenic' which is a fancy way the medical fraternity say "I don't have any fucking idea why this happened." They've taken vials and vials of blood. I have to have another MRI next month once the bleed goes down so they can see if it was hiding something. Say a tumour or a melanoma. But they don't think so, they think it's just bad luck.

The specialists say... The face drop will go (could've been worse Al). The weakness in your left arm should pass (but hold off replacing those broken glasses and vases until you know for sure) Your vision should go back to normal (and if it doesn't get new glasses). Your words will come back to you. The fatigue will pass.  Give it time. How much time? As long as it takes. Maybe 3 months. Maybe more. They say they understand it's frustrating. But I should be thankful I'm not dead.

Yes. Thank you doctors. I've got that bit. I've beaten the odds.  I'm not dead. I have gotten off lightly.

They warn of personality changes - I might be more emotional (my poor husband I think). I might say or act in ways that are different from before. It might be that I have permanent physical changes. Just rest. Just remember - no straining, no lifting, try and avoid extreme emotional responses. Sure. Fine. How long for? As long as it takes. 3 months. Maybe more.

I still have no answers. There is nothing I can control. Nothing I can change which limits the possibility of this happening again. The median age for a person suffering a stroke of this kind is 86 years old.  They rarely suffer a second stroke.

Possibly because they're dead from old age. I've got 42 years to go before I'm supposed to get this kind of stroke. I think to myself, how strange is it that just two years ago that this same brain was full of suicidal ideologies, that I saw my death as my only useful contribution. And now this same brain, this same brain wants so desperately to live. This brain wants to feel like it has some control, that they are doing something actively, changing something permanently, being responsible for not having another brain bleed.

I'm still finding it hard to process. It's been three weeks. I am starting to get out and about again. I am still feeling very vulnerable and highly emotional. I drop the children at school and then get a lift home. Talk to friends. Potter about doing things that need doing. It's still restful compared to my normal pace. I have to relinquish control of many things to my husband. I don't have the energy or if I'm honest, the capacity. I have to work - we have bills and I don't get paid if I don't work. While speaking to a client I lose all my words, my brain refuses to function. I have to apologise and reschedule. I cry. Again. I'm still an ugly crier. Some people just can't catch a break. At least I can still laugh at myself.

In 36 hours it'll be three weeks since my brain haemorrhage didn't kill me. It's another 4 weeks until we can check out what the bleed is doing. I'm moving forward while going nowhere. It's like walking up the down escalator. I wait. We wait.

I'm more comfortable helping than being helped. I'm not comfortable with platitudes. Unexpected kindness makes me cry. I find being frank about it helps. I end up reassuring people. I am ever so appreciative for the food, the flowers, the fruit and the Facebook love.

I don't have the words to express my thanks to the friends that are in touch, that help out, that follow through, that make me laugh, that let me cry over and over again. They don't tell me it's okay. They nag me about rest. I admire my mother's superhuman efforts not to nag me and to remain upbeat when she calls.  Dad and I talk in reassuring shorthand and play Words with Friends. I tell my wider family that I love them because life is short.

And survived. And all is the same and all is different.

PS: Strokes - all the cool kids are doing them: Emilia Clarke's Story